Some analysts believe that one of the reasons for the increase in the number of ENS domain name registrations is the reduction of gas fees on the Ethereum network. On July 25, Glassnode data showed that the average gas fee of Ethereum on the 7th was 25.825 Gwei, a new low in a year. During this period (July 19th to 25th), the daily number of new ENS domain names gradually returned from 4 digits to 5 digits. On July 24th within a week, the new domain name of “.eth” increased the highest 21723.

In addition to the attractiveness of Ethereum gas fee reductions, the hype effect of the secondary market is a potential stimulus. On July 4th this year, the ENS domain name of “000.eth” was sold for 300 ETH; on July 19th, someone bid $1 million for the ENS domain name “amazon.eth” on OpenSea, although it did not use this Price deal. These secondary market news continues to increase the exposure of ENS and stimulate speculation. May was also a month of surge in ENS domain name registrations, with Dune Analytics data showing that a total of 365,652 ENS domain names were registered, a higher number than July. The surge in registrations and sales that month was related to an online “flash show” at the time.

At the end of April, a blockchain project was preparing to issue airdrops to ENS users. An ENS domain name club named “10kclub” suddenly started to register a large number of “.eth” domain names consisting of 3 and 4 digits. The move boosted both ENS domain registrations and sales in less than a week.

In fact, every surge in registrations and sales of ENS domain NFTs is related to incentives or secondary market expectations. November 2021 is also the stage when ENS domain names will fly in both volumes, which is related to the ENS announcement of the airdrop of Tokens at that time.

By July, the increase in ENS domain name registrations and sales was definitely not only related to the reduction of Ethereum gas fees, but the secondary market once again brought hype expectations.

On July 19, another piece of news entered the field of ENS domain name followers.

A bid of 1 million USDC (equivalent to $1 million) was made on OpenSea for the domain name “amazon.eth”, but the bid did not receive a response from the domain owner. In the end, the domain name was not sold at this price either. The last sale of the domain name was 5 months ago, and the price was 33 ETH. Calculated at the time when ETH was around $3,000, the last transaction was close to $100,000, and it is currently worth less than $50,000. There are currently no new listing prices for this domain name.

Coincidentally, July 19 also coincided with the time when Ethereum’s gas fee gradually decreased, and since then, the number of new registrations of ENS has also begun to increase. What’s more interesting is that this ENS domain name associated with the name of an Internet company has also attracted attention in the secondary market, and the ENS domain name related to amazon is almost the most listed.

At present, NFTGO data shows that there are 269 ENS domain names with the word Amazon (Amazon), and the listing price ranges from 0.013 ETH to 100 trillion ETH, while the highest price of the actual transaction related domain name is 0.2 ETH, which is “amazons.eth” ”, equivalent to $416, and the current listing price is 88.8 ETH, which is equivalent to $125,800; another domain name with an American flag image in front of Amazon is the latest transaction, and the transaction price is only 0.2 ETH. 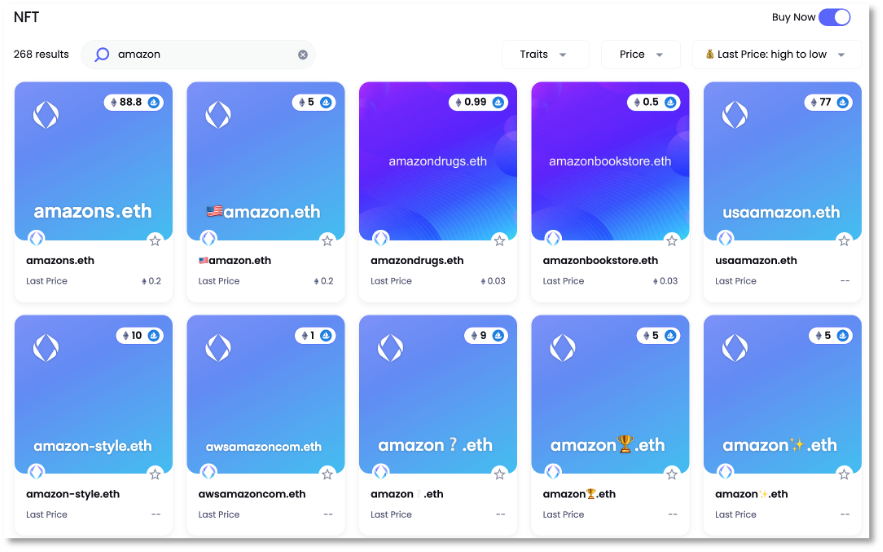 In addition to Amazon and Google, the names of well-known overseas companies such as Facebook, Twitter, and Apple have been registered as ENS domain names. The Chinese and English names of domestic Internet companies Ali and Tencent are also used for ENS domain name registration. This is the same logic as in the hype market of Internet domain names in the past. The holders of these ENS domain names are betting on a future – when Web2 enterprises enter Web3, they may need a Web3 domain name.

At present, the Web3 domain name market is still in its early stage, and hype is an obvious sign. The high transaction price is not an adaptation scenario for ordinary people, but this does not prevent ordinary users from wanting to own a Web3 domain name. Gas fees may create an experience window for users.

(The above content is excerpted and reproduced with the authorization of our partner MarsBit, the original link | Source: Honeycomb Tech)

This article has as many as 320,000 in July alone! Why has the number of Ethereum ENS domain name registrations soared? First appeared in Block Guest.