On January 26, Buterin first proposed the soul token in the article Soulbound(Soulbound Token ,SBT )the concept of,Although there are some SBT Apps test the waters first, but Binance is 9 launched in the month BAB Will SBT A big step forward.

As soon as BAB was launched, there was a wave of discussion about SBT in the cryptocurrency industry. BAB’s on-chain data is also rising, and more projects are trying to empower BAB, including but not limited to NFT, Metaverse, DEX and other tracks. PANews for currentcombine BAB’s projects have been comprehensively sorted out, and BAB’s on-chain data is also remarkable.

According to Dune Analytics data, as of September 30, BAB has minted a total of 372,612 coins, of which 8,422 coins have been revoked, and the actual effective minting amount is 381,034 coins. At the time of writing, PANews found that the BAB minting data has been in a state of dynamic growth, with more than 10,000 new BABs added to the chain within 24 hours.Compared with the data that BAB has just launched, the popularity of casting has declined.,Growth has also flattened.

from castingofaddress informationlook, of which 39.4% is a minting of an existing address, more than 6 The success comes from new addresses, and new addresses that have never traded on the chain account for 10% of the total. 41.4% .A higher proportion of new addresses means,BAB Attracted some Binance users to open BNB CHain’s on-chain operation helps in disguise BNB Chain user growth.maybe because BAB The minting needs to be completed on Binance KYC ,Some users do not want to bind their commonly used addresses, so they register new addresses to bind.

Metamask is the most used wallet in interactions, Tiny World is the GameFi game with the most users, and Element is the NFT aggregation trading platform with the most interactions; among the tokens involved in BAB minting and interaction,and BUSD The maximum number of addresses interacted with 24645 indivual,USDT followed closely, but in terms of the number of transactions,USDT slightly more than BUSD ,However, there is not much difference between the two.stablecoin USDC However, it is dwarfed by only the number and number of transactions. BUSD and USDT about one-tenth of . 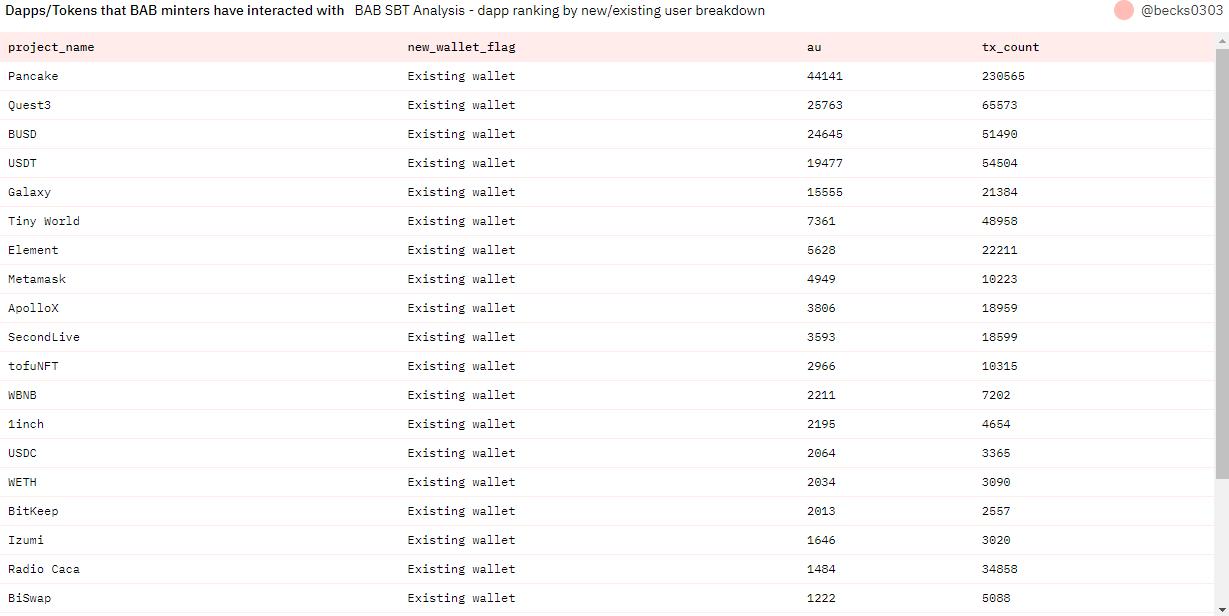 These interaction datareflect active participation BAB The project situation of the cooperation, but also the realreacted to BNB Chain usersusage habit.and BAB collaborative projectsactive data,also reflects the current BAB empowermentThe marketing strategy of the company is also an effective way to activate users in a bear market.

according to PANews combing,Since the launch of BAB on September 8, there have been about 32 projectsand BAB Combined and empowered.The project track is all over NFT, DEX, etc.CooperationThe methods are also diversified. Some projects only plan short-term activities for BAB, and some projects have long-term planning. PANews has made a comprehensive inventory of the current projects that are mainly empowered by BAB. The summary is as follows: 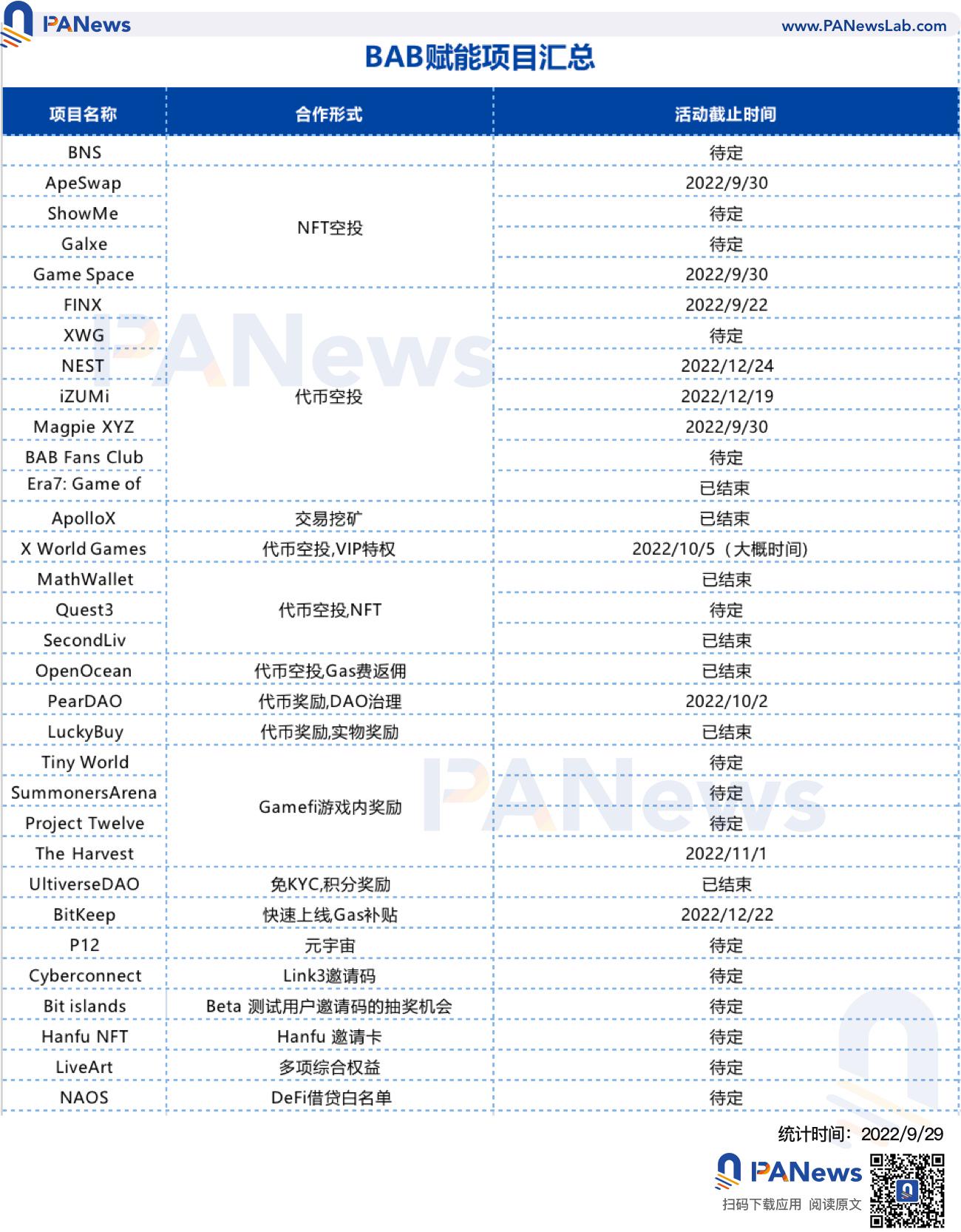 In addition to the conventional airdrop NFT and airdrop tokens, the existing BAB empowerment projects also include airdrops, gas fees-free, KYC-free and physical rewards combined rights. In addition, there are Web3 decentralized and deeply integrated reward methods, which are mainly divided into the following categories:

1. Airdrop domain name:The user holding the BAB is completing BNS domain name can be obtained after the task of Binance Name Service. The main tasks are to follow Twitter, join Discord groups, join Telegram groups, etc. In fact, domain names have always been the focus of the industry, and more creative gameplay can be extended based on the BAB domain name track.

2. DAO governance: PearDAO gives specific governance rights to users who hold BAB. DAO is a new trend in the current community development, but at this stage, DAO has encountered various problems such as low community participation and weak synergy in its development.For example, if PandaDAO grants special governance rights to users who hold decentralized identity certificates, it may improve DAO’s performance.Governanceefficiency.

3. GameFi game rewards: GameFi games reward BAB holders in various ways, some directly reward heroes, some reward in-game tokens, and some who hold BAB enjoy special rights in the game. The emergence of BAB has opened up more application scenarios for GameFi games and can become part of the ecological development of GameFi games.

5. DeFi lending whitelist: The DeFi protocol NAOS Finance assigns a whitelist to BAB holders, and users can directly participate in the real assets of the NAOS protocol without KYC.loan. The way NAOS Finance airdrops the whitelist is an innovative form of combining Web3 identity credentials with the real world.

6. Web3 consumption:Art Platform LiveArt extends a range of products and functions to BNB Chain , to introduce the application of BAB into its ecology and promote the consumption of Web3. The benefits of LiveArt to holders include whitelisting,Virtual Elite, limited edition physical art and collectibles, NFT database access privileges, and more.

7. Metaverse: The maturity of similar decentralized identity certification systems such as BAB,Digital identity systems that can be called entering the metaverse, such as P12 It allows the holder to unlock exclusive access rights and tickets.

currentBAB just beginning BST The first step of exploration, there is still a lot to be discovered in the futureapplication scenarios.for examplemulti-chain proof, The old public chains such as ETH and Cosmos and the new public chain Aptos have gathered a large number of users. In the era of multi-chain, using a decentralized identity similar to BAB to open up the combination of multi-chain also has a very large room for expansion;on-chainCredit,users with a decentralized identity certificate,After accumulating transaction behaviors on the chain and opening up the asset certificate of the exchange, the threshold for using certain products can be lowered, such as low-interest loans or unsecured credit loans, and the utilization rate of funds can be improved..

(The above content is excerpted and reprinted with the authorization of our partner PANews, link to the original text)

In this article, Binance BAB has minted 370,000 coins within a month of its launch, and more than 30 projects first appeared on the block.