In just three days last week, Bitcoin (BTC) investors experienced their biggest ever real losses (losses on transaction realizations), according to data from blockchain data analytics service Glassnode – the sell-off of BTC led investors to Lost $7.3 billion. On June 18, the price of BTC hit a new low of $17,700 for the year, which is also the first time it has fallen below $20,000 since 2020.

So, who sold BTC in the downside of the crypto asset market?

On June 22, Canadian crypto mining company Bitfarms said it sold 3,000 BTC in the past seven days to balance its debt. The company decided to “no longer hoard” the daily output of bitcoin, opting instead to optimize the company’s balance sheet by taking a “liquidity-enhancing, deleveraging” approach.

Bitfarms can be seen as one of Bitcoin’s public miners, and the falling market is threatening their very existence. In the first four months of 2022, public mining companies sold 30 percent of bitcoin production, according to Norway-based research firm Arcane Research. The slump in mining profitability forced these miners to increase sales to more than 100% of their output in May.

In addition to miners, the world’s largest Bitcoin spot exchange fund (Bitcoin Spot ETF) is also selling BTC. The Purpose Bitcoin ETF, which tracks bitcoin’s spot price, saw an outflow of 24,510 BTC on Friday, the worst single-day redemption since the fund debuted on the Canadian Stock Exchange in April 2021, according to Arcane Research, analysts said. It is believed that the huge capital outflow may have been caused by large-scale forced liquidation.

The deterioration in cryptocurrency mining profitability has forced miners to liquidate their bitcoin holdings.

On June 21, Bitfarms, the largest crypto mining company in North America by computing power, said it had sold 3,000 BTC in the past seven days, accounting for about 47% of its 6,349 BTC holdings. According to the company, it will use around $62 million in sales funds to “reduce its BTC credit line at Galaxy Digital” to rebalance debt. After Bitfarms sold its crypto assets, including 1,500 BTC, the company’s line of credit was reduced from $100 million to $66 million in June, and its debt was also reduced to $38 million.

According to Bitfarms CFO Jeff Lucas, the company will “no longer hoard” all the bitcoin it produces every day (about 14 BTC), instead opting to take action “to improve liquidity and deleverage” to optimize the company’s balance sheet surface. Bitfarms said it also secured a $37 million equipment financing deal with NYDIG, which keeps the company’s liquidity at about $100 million.

“We believe that in the current market environment, selling some of our BTC holdings and daily production as a source of liquidity is the best and cheapest approach,” Lucas said.

As a listed crypto mining company, Bitfarms disclosed the news of the sale of BTC only yesterday, and it is not only the mining company that sold BTC, Arcane Crypto data shows that the top 28 companies that contribute about 20% of the computing power to the Bitcoin network Mining companies sold 4,271 BTC in May, a 329 percent increase from the previous month.

In the first four months of 2022, mining companies sold 30% of bitcoin production, according to Arcane Research. The slump in mining profitability forced these miners to increase their sales rate to more than 100% of their output in May, and “the situation worsened in June, which means they may sell more.”

Bitcoin sell rate for miners in 2022

Jaran Mellerud, a researcher at the research firm, explained that miners are the only natural net sellers of Bitcoin, receiving 900 BTC per day. Among them, miners have very low production costs because they have access to cheap electricity and use new energy-efficient machines, which means they have no risk of shutting down their machines, but lower cash flow will make it difficult for them to obtain financing, which may affect them expansion plan.

“Mining companies only account for about 20% of Bitcoin’s computing power, and studying their behavior can suggest what private miners are doing.” Jaran Mellerud pointed out that miners can sell most of their bitcoin for cash flow, and they can also Maintaining a larger share of production by accessing financial markets during bull markets may be more difficult for private miners with higher production costs. “Miners are the largest whales in the Bitcoin market, holding around 800,000 BTC, of ​​which miners own 46,000. If they were forced to liquidate a significant portion of these holdings, it could lead to a further drop in the price of Bitcoin.”

In addition to miners, the BTC thrown into the market also comes from the Bitcoin Spot Exchange Fund (Bitcoin Spot ETF).

Arcane Research data shows that on Friday, the world’s largest bitcoin spot ETF “Purpose Bitcoin ETF” outflowed 24,510 BTC, which was the worst single-day redemption since the fund debuted on the Canadian Stock Exchange in April 2021. . The outflows meant the fund had to sell about $500 million in BTC at Friday’s prices, adding to selling pressure in an already shaky cryptocurrency market, the research house wrote in a report. 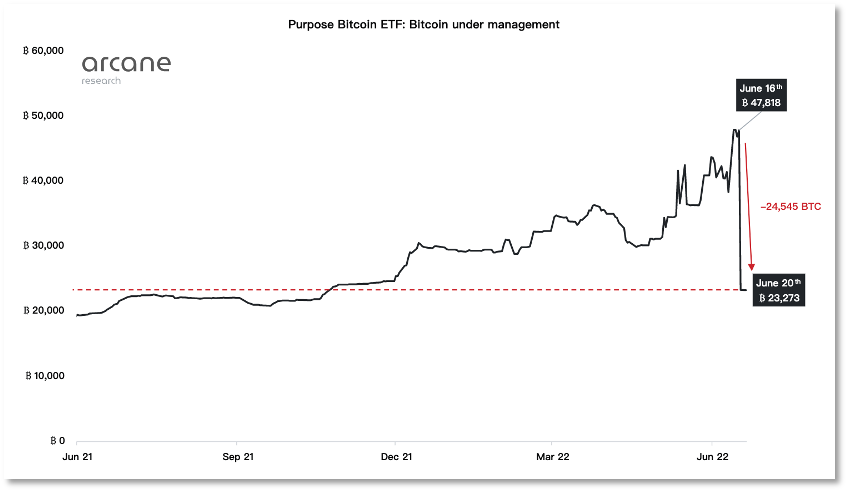 The amount of BTC managed by the Purpose Bitcoin ETF halved

Vetle Lunde, a researcher at the agency, analyzed that the huge capital outflow is likely to be caused by large-scale forced liquidation. “The forced selling of 24,000 BTC may be the reason why BTC fell to $17,600 this weekend.”

Bitcoin Spot ETFs track the value of Bitcoin and provide a way to invest in BTC without directly dealing with BTC, with ETF managers actively adding and selling Bitcoin to match investor investments and redemptions into the fund. These ETFs can be traded on traditional regulated stock exchanges without requiring users to go to crypto asset trading platforms.

BITO saw its second-largest net inflow last week since its launch last October, causing the fund’s Bitcoin exposure to grow by the equivalent of 4,115 BTC. Data shows that the fund manages $668 million in assets, equivalent to about 31,500 BTC.

Lunde analyzed in an Arcane Research report that the comparison shows that at least some U.S. investors see the current BTC selloff as an attractive entry point, taking advantage of forced selling in hopes of profiting from a short-term rally.

In addition to the sale of bitcoin miners and the liquidation of the financial derivatives market, the liquidity crisis of giant whales in the crypto market is also exacerbating the risk of market downturn, such as crypto asset lending platform Celsius, crypto hedge fund Three Arrows Capital, etc. all appeared last week A case of selling assets to save yourself.

According to the data of Glassnode, a blockchain data analysis service provider, in just three days last week, the realized transaction loss caused by the sell-off of BTC reached 7.3 billion US dollars. Under such circumstances, mining companies such as Bitfarms are raising funds, Celsius also began to consult lawyers to seek to alleviate the crisis from capital channels, and BlockFi, another encrypted asset lending platform, obtained a repayment credit line of $250 million from the encrypted asset trading platform FTX. funds.

The signs of whale capital outflows and seeking financing seem to indicate that the cold winter of the crypto asset market is not in sight.

(The above content is excerpted and reprinted with the authorization of partner Mars Finance, original link | Source: Honeycomb Tech)

This article Bitcoin sell-off leads to $7.3 billion in losses, and the cold winter is not over yet? First appeared in Block Guest.