Against the backdrop of difficult times in global financial markets, rediscovering its core values ​​is a top priority after the cryptocurrency industry suffers a major setback in 2022. Crucially, trust and credibility need to be re-established; at the same time, efforts need to be redoubled to increase user relevance and usability of cryptocurrencies. 2022 will likely be seen as a year that should be forgotten, but it should also mark an important turning point for an industry. While 2023 may be too early for a full recovery, we believe that the long winter will eventually usher in a decentralized spring. Let’s stick together and build the future of cryptocurrency.

Facts have proved that 2022 is a turbulent year for projects and users in the cryptocurrency industry. The cryptocurrency winter has arrived, with a total market capitalization of cryptocurrencies of $829 billion as of January 1, 2023, down 64% from a year ago. While DeFi token prices and market demand for NFTs remain subdued, developers have continued to develop innovative protocols, sparking new trends and narratives over the past year.

The following is a summary of key points for the cryptocurrency industry in 2022:

The cryptocurrency market has been trading sideways after the second quarter of 2022, in the low range of $1 trillion and below. Despite the increase in stablecoin dominance, the market cap has shrunk by $27.3 billion; meanwhile, USDC and BUSD have gained in market cap. The FTX contagion affected approximately over 1 million users, creditors and investors, with more to come. Except for crude oil and the US dollar, mainstream assets underperformed across the board. BTC was the worst performing asset, down 64.2%. Driven by Ethereum’s upgrade to Merge, by the end of 2022, the amount of ETH pledged will grow steadily to 15.8 million quarterly. The market value of DeFi tokens (excluding stablecoins and wrapped tokens) plummeted 72.9%, and the market share of derivatives exceeded that of income aggregators. In the first cold winter encountered by the NFT market, OpenSea’s market share fell to 65.4%, but it still dominates. The spot transaction volume shrank by 67.3% compared with January 2022, and the fourth quarter saw the largest decline, reaching 21.2%.

Amidst challenging macroeconomic conditions and a series of bankruptcies and crashes in the cryptocurrency industry, the total cryptocurrency market cap at the end of 2022 will be $829 billion, a 64% decrease from the beginning of the year.

Q2 was the most brutal period, with huge declines. The market then went sideways until November 2022 when FTX crashed.

The average transaction volume in Q4 was $59.0 billion, down 32.8% QoQ. Overall, deal volume has declined steadily over the past year, averaging $86 billion.

The trend of the cryptocurrency market is closely related to the trend of the US stock market, especially the S&P 500 index in the first three quarters of 2022. In the fourth quarter, however, the correlation turned negative, as FTX led to a decline in cryptocurrencies, while equities saw a recovery towards the end of the year.

Stablecoins gain market share but lose $27.3B in market cap; $USDC and $BUSD grow in value at the same time 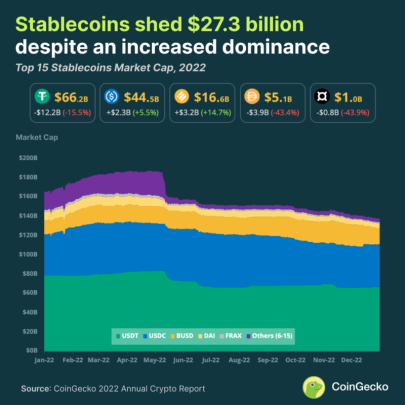 The dominance of the top three stablecoins Tether (USDT), USD Coin (USDC) and Binance USD (BUSD) has increased in the cryptocurrency market over the last year as cryptocurrency investors moved to safer assets. However, the stablecoin market was not immune to outflows, with a total loss of $27.3 billion (16.6%) by the end of the year. Most of these losses were incurred during the TerraUSD (UST) crash in May 2022. The industry has performed relatively well since then, despite periodic “black rumors” from another decoupling event.

The market capitalization of the largest stablecoin, $USDT, fell 16%, to about $12 billion. On the contrary, $USDC and $BUSD have each increased by a certain amount, about 2 billion US dollars each.

The top decentralized stablecoins $DAI (-43%) and $FRAX (-44%) lost similar percentages, though $DAI’s $4 billion loss in absolute terms was almost 5x that of $FRAX.

Outside of the top 5, $USDN dropped out of the top 15 following the depeg in November, with $MIMATIC taking its place. Launched in May, $USDD now sits at No. 8, with a market capitalization hovering around $700 billion since June.

The chain reaction caused more than a million users, creditors and investors to be damaged in the FTX incident; there was also a domino effect in the following months 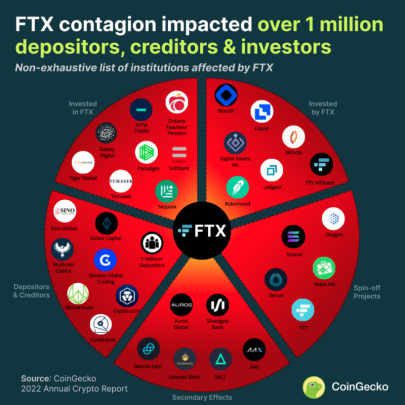 CoinDesk published a document claiming that most of Alameda’s assets are $FTT issued by FTX. Immediately, CZ announced that he was going to sell the $FTT pledged by Binance. This triggered a run and caused FTX to stop withdrawals and file for Chapter 11 bankruptcy. It was later confirmed that Alameda was insolvent after Terra’s crash, while FTX user funds were embezzled to prop up the failed trading firm.

Some examples of hard-hit institutions include:

BlockFi: The lending company that provided $355 million in loans to FTX and $671 million in loans to Alameda. Genesis Global Trading: $175M Zombie Deposits on FTX. Redemption services are not currently available for its loan products. Silvergate Bank: Users Withdraw $8 Billion After FTX Collapses. The bank has since laid off 40% of its workforce.

While many companies have collapsed in an instant, 2023 is likely to experience the same for many more.

Major assets underperformed across the board except Crude Oil and USD; $BTC was the worst performing asset, down 64.2%

Most assets, such as gold and U.S. Treasuries, end 2022 in the red. Bitcoin was the worst performer of these assets, ending the year with a -64.2% loss.

With the Federal Reserve raising interest rates across the board in 2022, the U.S. dollar index (DXY) has outperformed all assets. However, most of its gains were lost in the fourth quarter as rate hikes slowed; DXY fell -7.4% quarter-over-quarter and returned just 8.0% year-to-date.

Crude saw a sharp rise at the start of the year as the coronavirus lockdown lifted and demand increased, coinciding with a massive supply shortage caused by the war in Ukraine. However, it has given back most of its gains, ending the year up just 6.4%.

Driven by Upgrades, Ethereum Stakes Grow Steadily to 15.8M in 2022 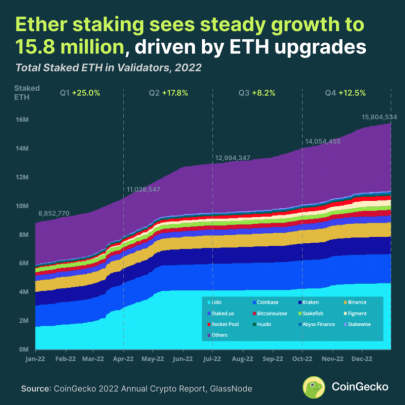 Despite the slump in the cryptocurrency market, Ethereum (ETH) total pledges showed steady quarterly growth, increasing by 25% in the first quarter of 2022, 17.8% in the second quarter, 8.2% in the third quarter, and 8.2% in the third quarter of 2022. It grew by 12.5% ​​in the fourth quarter. Total stakes on Ethereum rose from 8.8 million to 15.8 million by the end of the year.

The rise in the number of validators staking ETH in the first half of 2022 may be due to the bullish sentiment for the Ethereum merger. After a successful merger in mid-September, the cryptocurrency community began to look forward to the upcoming Shanghai upgrade, as the previous merger upgrade drove significant growth last quarter.

Lido (LDO) continues to occupy the first place in pledge volume, accounting for 29% of the pledge volume. The closest competitor, Coinbase, only has a 12.8% market share.

The Ethereum Shanghai upgrade is expected to take place in March, at which time staking users will be able to withdraw their pledged $ETH. Once the upgrade is complete, we may see the staking leaderboard shuffled out of order.

The market value of DeFi tokens plummeted 72.9%, and the market share of derivatives exceeded that of yield aggregators 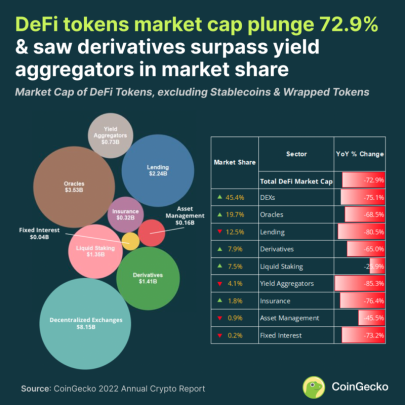 DeFi protocols have been hit harder than other tracks, which can be blamed on earlier exorbitant valuations and the withdrawal of capital. Lending and yield aggregators will be the worst performers in 2022, falling 80.5% and 85.3%, respectively. The prices of many protocols such as Convex Finance and Alchemix native tokens even fell by more than 95%.

Derivatives held market share at 7.9%, despite a 65.0% year-over-year decline, allowing it to overtake yield aggregators — thanks to decentralized perpetual contract trading platforms such as GMX (GMX) and Gains Network (GNS) surge in popularity.

In the first cold winter of the NFT market, OpenSea’s market share fell to 65.4%, but it still dominates

The NFT market is in its first bear market cycle-the NFT transaction volume on the Top 8 chain plummeted from $13.3 billion in the first quarter to $1.5 billion in the fourth quarter of 2022, a drop of 93.1%. At the same time, royalties for NFT creators have similarly been reduced by 95% since the beginning of the year.

In the NFT winter, OpenSea (OpenSea trading volume includes Ethereum, Polygon, and Solana) still dominates, accounting for 65.4% of the NFT market trading volume, excluding swiping volume. While their market share has decreased by 24.3 percentage points since January 2022, the rise of Solana NFTs has boosted Magic Eden’s transaction share, rising to 12.5% ​​by the end of 2022.

While many new competitors have emerged in the NFT market, such as LooksRare (LOOKS) and X2Y2 (X2Y2), OpenSea has defended its dominance. These competitors incentivize users to transact on their platforms by handing out rewards. But users often get these rewards by swiping. In January 2022, 98.5% of the NFT trading volume on LooksRare was brush volume. Thereafter, the transaction volume is also reduced to 75.5% in December 2022 due to the reduction in incentive emissions. 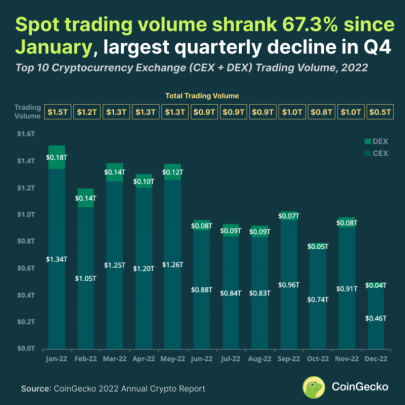 Despite publicly demonstrating the risks of centralization, the CEX:DEX ratio continues to rise. Although the market share of DEX increased slightly in November, benefiting from market concerns that Binance may go bankrupt, by the end of 2022, CEX still accounted for 92.5% of the market share.

Declining trading volume is a signal that investors are gradually withdrawing money from the market, or they may be indicating that they are exiting the market completely through the closure of a CEX.