When the music box suddenly stopped, the Trojan stopped turning, when the fluid rhythm could not be continuous,financeThe market went into panic. Recently, whether it is the stETH liquidity crisis caused by Celsius, or the exchange AEX suspends user withdrawals due to the mismatch of the funding period and the lack of short-term liquidity funds, both are the negative effects of insufficient market liquidity.

In the cryptocurrency market, the purpose of liquid staking projects is tohelp usersget PoS At the same time, it can release the liquidity of pledged assets. However, in the recent extreme market situation of bLUNA and stETH, the liquidity provided by the liquid pledge project did not allow users to withdraw in time, and also caused market stampede and panic.

when Terra When this set of mechanisms collapsed, the exchange ratio of bLUNA/LUNA was about 0.7. bLUNA is through Lido Derivatives obtained by Finance after staking LUNA require a 21-day waiting period to withdraw, and can also be exchanged for LUNA through Astroport or Terraswap. If the liquidity of bLUNA in the secondary market is good enough or the staking platform provides additional exit channels, the users who hold bLUNA can completely change to LUNA and sell it in time to reduce their losses.

The above is just an extreme situation, and now stETH has no additional risks, just lack of liquidity, which has also caused panic among some users, causing stETH to have a negative premium of more than 5%.The withdrawal conditions of liquid pledge, the pledge ratio of the project party, the distribution of liquidity and other conditions all affect the user’s experience when exiting.public chain, Each project is different. In the following, PANews will introduce the relevant situation of liquidity pledge projects on major public chains. When you choose to pledge projects, you must understand these liquidity solutions and potential risks. 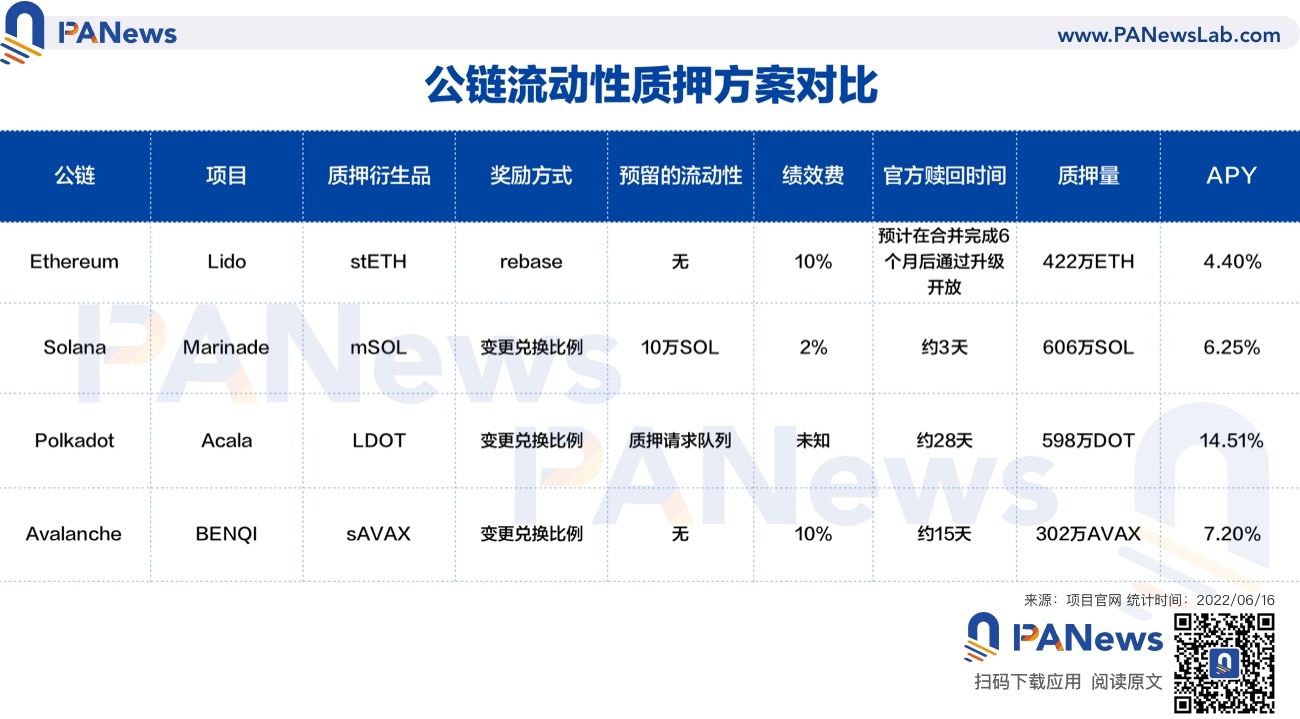 Ethereum upgrades will be supported by proof-of-work (PoW) transition to Proof of Stake (PoS). The staking function will be activated when the beacon chain is launched in December 2020, but the pledged ETH needs to be redeemed through an upgrade after the “merge” of the Ethereum mainnet and the beacon chain PoS system is completed. In the eyes of the Ethereum Foundation, the priority of redeeming the pledged ETH is not high. The difficulty of the merger can be called “replacement of an engine for an aircraft in flight”, so the redemption time may be delayed.

If the user establishes a node pledge by himself, it needs certain technical and hardware support, the pledge amount must be a multiple of 32 ETH, and the probability of being punished by Slash is greater. Based on various restrictions, a liquid staking protocol based on Lido was born. The ETH liquidity token pledged by Lido is stETH, and stETH adopts the method of Rebase to adjust the balance every day to issue rewards, and always keep the intrinsic value of ETH and stETH equal. After launching in December 2020, Lido’s mobile staking service has been expanded to Terra,Solana,Kusama,Polygon and Polkadot wait on the chain.

According to the data on Lido’s official website on June 15, the funds pledged through Lido are about 4.39 billion US dollars, and the number of pledged users is 133,000. Among them, the funds pledged on Ethereum are 4.32 billion US dollars, accounting for 98.3% of Lido’s total pledged funds. Lido collects 10% of staking rewards, of which 5% is allocated to node operators and 5% to Lido DAO treasury.

There are 4.22 million ETH pledged in Lido, while the total amount of ETH pledged on Ethereum is about 12.88 million.according to Dune Analytics According to @eliasimos, Lido accounts for about 90.8% of the entire Eth2 liquidity stake. 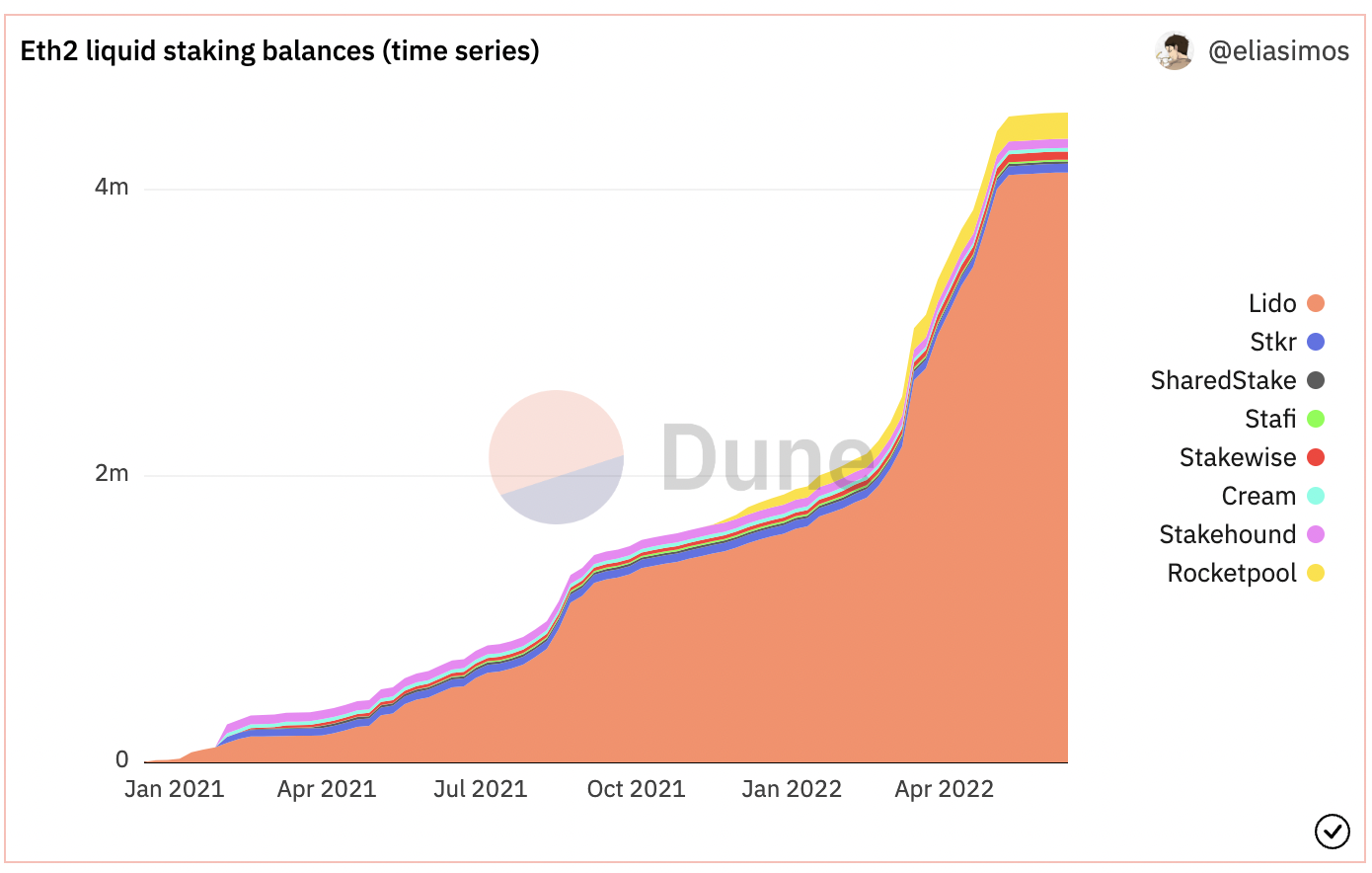 The official website of Lido does not provide additional exit channels for pledged users, but through liquidity mining, the liquidity of stETH is stimulated, and the scale and brand effect of stETH are used throughout the DeFi Widely used in ecology.

As of the afternoon of June 15, the main lending protocol on Ethereum has Aave In V2, stETH deposits are about $1.33 billion, accounting for 21.5% of the total deposits in Aave V2 on Ethereum;Curve The liquidity of ETH/stETH in China is US$609 million, of which stETH accounts for 80.38% and ETH accounts for 19.62%. Under the panic caused by Celsius, the liquidity of the Curve pool has been deviated from the balance, but there are still more than 100 million US dollars in ETH. In the Anchor on the original Terra chain, bETH generated by Lido pledge can also be used as collateral.

The decoupling of stETH this time is only a matter of liquidity. As long as the demand for staking ETH is still there, there will be demand for stETH to be purchased. If there is a large discount, it will be a buying opportunity for long-term holders of ETH.

Solana combines Proof of History (PoH) and Proof of Stake. Users can pledge SOL to become a validator, or they can delegate SOL to a validator on the Solana chain through “delegated pledge”. If you pledge through official channels, you will need to wait 1 to 3 days to start receiving rewards after staking, and 1 to 3 days to redeem SOL tokens after cancelling the pledge.

Marinade is the largest liquid staking protocol on Solana, and users will receive mSOL tokens after staking through Marinade. mSOL is a value-added token, and the exchange ratio of SOL to mSOL will be adjusted according to the accumulated rewards.

The current circulation of mSOL is 6.06 million SOL, which is used in the main DeFi protocols of the Solana ecosystem, such asDEXSaber inOrcaetc., can also be used as collateral in the lending protocol Solend. Solend is the main place for mSOL, and the mSOL deposit is 1.237 million mSOL, which is equivalent to about 44.21 million US dollars. In DEX, Saber has better liquidity. The liquidity of the mSOL/SOL trading pair is $5.28 million, but it is not high relative to the total amount of mSOL. In addition, some liquidity is distributed in Orca,RaydiumCrema and other DEXs.

There are many liquidity solutions in Polkadot, includingAcala,Bifrost,ParallelLido, etc. all provide DOT liquidity staking services.

Take Acala, the first Polkadot parallel chain slot, as an example, which includes two liquid collateral derivatives, LDOT and lcDOT. lcDOT (Liquid Crowdloan DOT) is used to release the liquidity of DOT participating in crowd lending.Since the Polkadot parachain needs to pledge DOT through users and project parties, the slot can only be shared with Polkadot.SafetyThis part of the locked DOT will no longer receive additional inflation rewards. Parachain project parties usually use their own tokens to incentivize users who participate in crowd lending, and the locked DOT time is also long. Currently, the exchange ratio of lcDOT to DOT is about 0.66.

LDOT is a more general liquid collateral derivative provided by Acala’s Homa protocol. If DOT is delegated to other nodes through official channels, it will take a waiting period of about 28 days for redemption. LDOT provides an opportunity to redeem immediately.

At the beginning, the exchange ratio of LDOT and DOT is 0.1, and the exchange ratio will increase with the increase of time. At present, about 5.98 million DOTs are pledged, which is equivalent to about 49.16 million US dollars. LDOT can be redeemed as DOT immediately. The official website states that it will be redeemed from the pledge request queue first, and then rely on the liquidity of Acalaswap, but the liquidity of the pledge request queue is unknown. Users can also choose the normal unstaking route and wait 28 days. At present, the APY of LDOT is about 14.51%, and if you pledge LDOT, you can get an additional 4.11% APY.

BENQI was originally the largest lending agreement on Avalanche, but later faced competition from Aave and Trader Joe, and now the scale of Aave V3 on Avalanche has far exceeded BENQI. And BENQI also launched a liquid pledge service, and its pledge derivative is sAVAX.

At present, there are about 3.02 million AVAX pledged through BLS, which is equivalent to about 53.43 million US dollars. BLS does not provide additional redemption channels and needs to wait for a 15-day cooling-off period or trade from DEX. The pledge APY provided by BLS is about 7.2%, and the rewards are accumulated in sAVAX. The exchange ratio between sAVAX and AVAX is constantly increasing, and the protocol charges 10% of the verifier’s reward.

The biggest use of sAVAX is as collateral in BENQI. Currently, there are 1 million sAVAX deposits in BENQI; the AVAX/sAVAX trading pair in Plytypus contains 467,000 AVAX and 763,000 sAVAX, which is equivalent to a total of 22 million US dollars, providing the main liquidity for sAVAX sex. In addition, sAVAX can also be used as collateral for lending YUSD in Yeti Finance, and the liquidity of the sAVAX/AVAX trading pair in DEX Trader Joe is $6.21 million. Aave V3, the largest TVL on Avalanche, does not support sAVAX, either because of security concerns or because BENQI and Aave are competing products.

Some projects reserve a small portion of tokens as liquidity when users exit immediately, such as Marinade on Solana. Although this will lead to a slight decrease in overall revenue, it also adds a guarantee for the exit path of users.

On the whole, the liquidity of liquid collateral derivatives in DEX is not good. Some public chains lack Stableswap and have high transaction slippage. Relatively speaking, sAVAX has better liquidity.