Ethereum is one of the most secure and decentralized Layer 1 blockchains with high “purity”, which means that certain concessions need to be made in terms of scalability. The Ethereum mainnet can only process about 15 transactions per second, the heavy usage has congested the network, and high fees have excluded some potential users.

Layer 2 is a scaling solution for Ethereum that has the same level of security and decentralization as the Ethereum main network by regularly submitting transaction packages to the Ethereum main network. Layer 2 only handles scaling and publishes final proofs to Layer 1, while security, data availability, and decentralization are all maintained by Layer 1. If a large number of transactions are transferred from Layer 1 to Layer 2, the transaction congestion of Layer 1 will also be alleviated.

Before sharding was implemented, Layer 2 was the primary way to achieve higher transaction speeds and greater transaction throughput without sacrificing decentralization and security. As early as 2020, Vitalik Buterin proposed a “Rollup-centric Ethereum roadmap” and believed that Rollups (and Plasma and Channels) should be used as a scaling strategy in the short to medium term.

Rollups are also officially considered the preferred Layer 2 solution for scaling Ethereum, enabling scaling and reducing gas fees by aggregating hundreds of transactions into a single transaction on Layer 1. According to how the transaction data is published to Layer 1, Rollups are divided into two categories – Zero-knowledge (ZK) Rollups and Optimistic Rollups.

A range of Layer 2 solutions are listed on Ethereum.org (funded by the Ethereum Foundation), including Arbitrum One, Optimism, Metis Andromeda, Boba Network for general purpose, and dYdX, Loopring, zkSync, ZKSpace for specific applications .

Ideally, Layer 2 inherits the security of Layer 1, but because many projects are still experimental, and the mainnet has been online for less than a year, many projects still have certain centralization problems.

After Optimism was upgraded to “EVM equivalent” OVM 2.0, the original fraud proof system was disabled, and a new system is being built, so it is more centralized and able to allow invalid state roots. If the validator collective fails, users will also be unable to withdraw funds. Metis Andromeda and Boba Network are forked from Optimism-based code and have the same problem.

If you zoom in to the last 90 days, TVL has only increased by 4.7% during this period; if calculated on the ETH standard, it has increased by only 2.9%. It shows that the funds on Layer 2 have not experienced large-scale growth in the past 3 months, and the growth in the past 180 to 90 days may also partly come from the launch of the new Layer 2 scheme.

The main driver of TVL on Layer 2 is Arbitrum, with a lock-up volume of $3.35 billion accounting for 56.9% of all Layer 2. Arbitrum has allowed users to vote for Arbitrum Odyssey, an ecological experience reward activity. Addresses with a balance greater than 0.0002 ETH on the Arbitrum network at the time of the snapshot are eligible to vote.

In practice, there is a certain gap in gas fees between solutions. According to data from L2Fees.info on May 3, sending ETH on the Ethereum mainnet costs about $4.13, and swap transactions cost about $20.65 in gas.

Metis Network has the cheapest gas fee. It only costs $0.02 to send ETH and $0.15 to swap transactions. After the April 12 upgrade, Metis saved transaction data off-chain. Then there are Loopring and ZKSync with ZK Rollup. Arbitrum One’s gas fees are relatively expensive, at $0.93 to send ETH and $1.29 to swap. 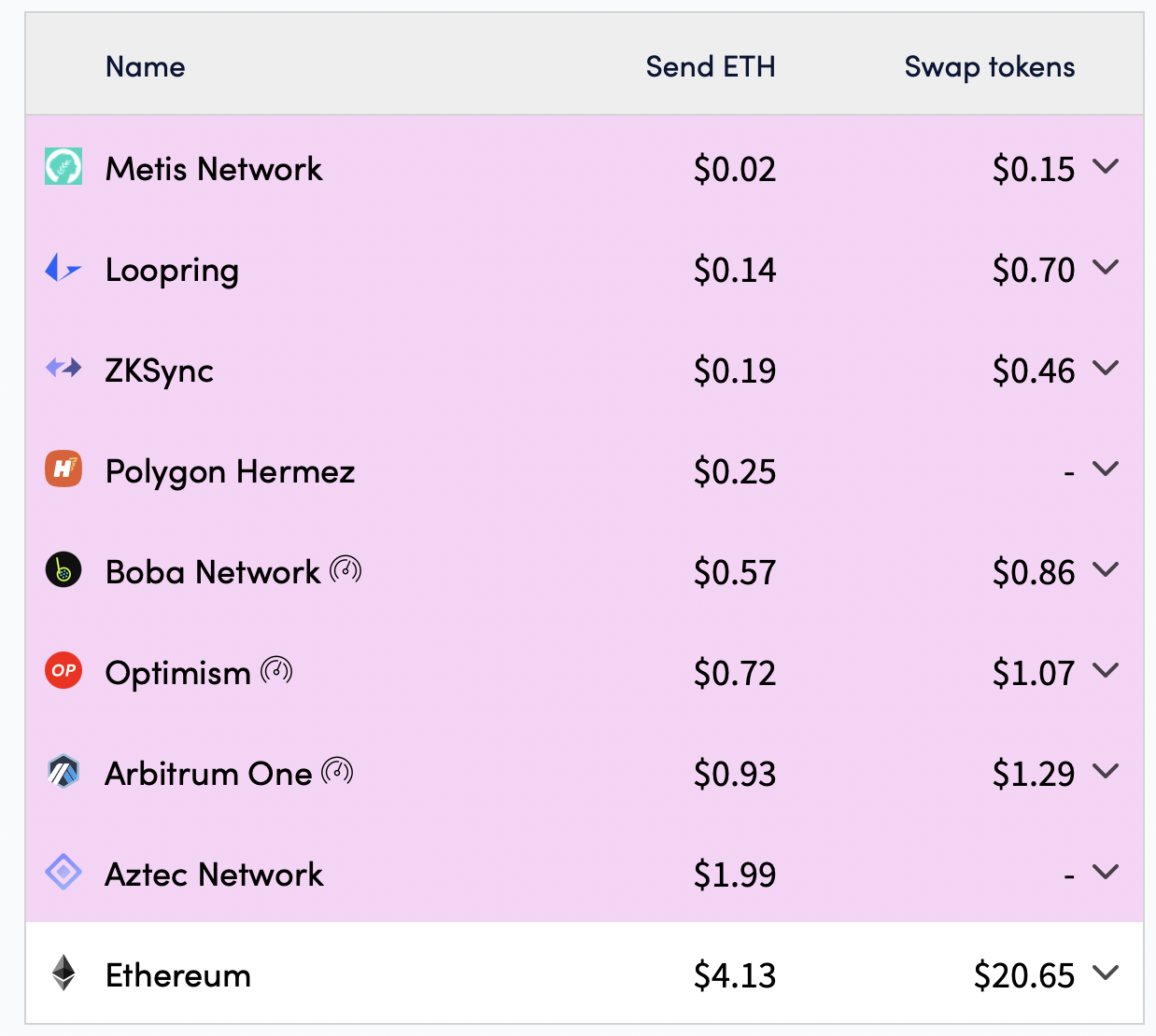 In the main Layer 2 ecosystem, Arbitrum has a first-mover advantage, allowing developers to build their own applications at the earliest (although Optimism launched the mainnet earlier), and also has more funds and cooperative applications. The ecosystem projects displayed on the Arbitrum official website have a total of 177. In practical applications, SushiSwap, GMX, and Curve bring a lot of funds. You can refer to the article of PANews: “Occupying “Half of the Country” of Layer 2, which new members will the Arbitrum ecosystem welcome in the near future? “.

Optimism is also a general-purpose Layer 2, with a total of 118 ecosystem projects announced on its official website. At present, Optimism mainly relies on Synthetix and its ecological projects. Synthetix itself is the project with the highest TVL on Optimism, and SNX is also the asset with the highest proportion on Optimism. Its ecological option protocol Lyra is also one of the most representative option protocols. In Uniswap V3 on Optimism, LYRA, AELIN, THALES, and SNX all ranked in the top ten in terms of liquidity.

dYdX is specially designed for derivatives trading and is the most representative decentralized derivatives trading protocol. According to the official website data, as of May 3, dYdX’s open interest was worth $950 million, the trading volume in the past 24 hours was $738 million, and there were 115,625 trading orders.

Loopring is a ZK Rollup exchange and payment protocol. It used to be the representative of order book DEX, and AMM DEX was added later. As of early May, the recent daily transaction volume on Loopring was around $6 million, with AMMs accounting for the vast majority.

A series of DeFi projects have been born on Metis, including DEX-like NetSwap, Tethys Finance, Hermes Protocol and Hummus Exchange for stable currency transactions, income aggregator Starstream, lending protocol Agora, and also integrated cross-chain bridge Synapse. However, over the past month, funds in multiple protocols have seen significant declines, with the TVL of Tethys Finance, Hermes Protocol, Starstream, Beefy Finance, Agora, Drachma and other protocols falling by more than 50%.

Boba Network faced a similar problem, with TVL on the entire chain down by about 90% from the highs. Even under the influence of the “WAGMI” incentive plan, OolongSwap, the project with the largest amount of funds on Boba, has only $27 million in liquidity.

zkSync is a ZK Rollup platform built by Matter Labs. zkSync 2.0 supports EVM compatibility and is powered by zkEVM. zkSync has been completely open source, and it is also one of the more promising Layer 2 solutions. At present, 92 ecosystem projects have been announced on the official website, some of which have been deployed to the testnet. The order book DEX ZigZag Exchange has been deployed to the zkSync mainnet.

While there’s been a lot of talk about Layer 2 recently, there hasn’t been a significant transfer of funds to Layer 2, and the sum of the TVLs of the various Layer 2 schemes has only increased by 4.7% over the past 90 days. Both Metis Andromeda and Boba Network have experienced serious capital flight. For Loopring, Metis Andromeda, and Boba Network that have already issued coins, platform coins account for a relatively high proportion of TVL. Optimism has announced the airdrop plan, which may attract more funds to be transferred to Layer 2 after the airdrop.

Although Layer 2 can theoretically inherit the security of the Ethereum main network, from the perspective of the implementation of each Optimistic Rollup scheme, it has not achieved complete decentralization and needs to rely on whitelisted participants. If the whitelisted participants act collectively, it may lead to the loss of user funds.