Year-to-date, the Ethereum DeFi market is experiencing a dramatic deleveraging as the market continues to slump, with more than $124 billion being swept away in just six weeks. Not just for digital assets, but almost all asset classes. Global tightening of monetary policy, a stronger dollar and falling valuations of risky assets have triggered widespread margin calls, debt liquidations and deleveraging. The ether investor base is now severely under-positioned in spot positions and locked in historically large realized losses.

In the digital asset space, Ethereum remains the largest smart contract platform, hosting a plethora of financial products, innovations, and automation. Over the course of the 2020-2021 bull cycle, the adoption of these products by institutions such as retail and institutions has led to an excessive increase in leverage in the DeFi industry.

As the bear market unfolded, the price of ether fell to the lowest triple digits, down 75.2% from its all-time high of $4,808. As the storm hits, the entire Ethereum ecosystem is currently experiencing a historic deleveraging event. This article will explore some of the warning signs, the scale of the deleveraging event, and its impact on the profitability of ETH investors.

There are some early signs that Ethereum usage and network demand are falling after hitting new highs in November. Daily transactions (pink) and average gas price paid (blue) are both in macro decline for nearly 6 months. This indicates that the overall activity, demand and utilization of the Ethereum chain is weakening. 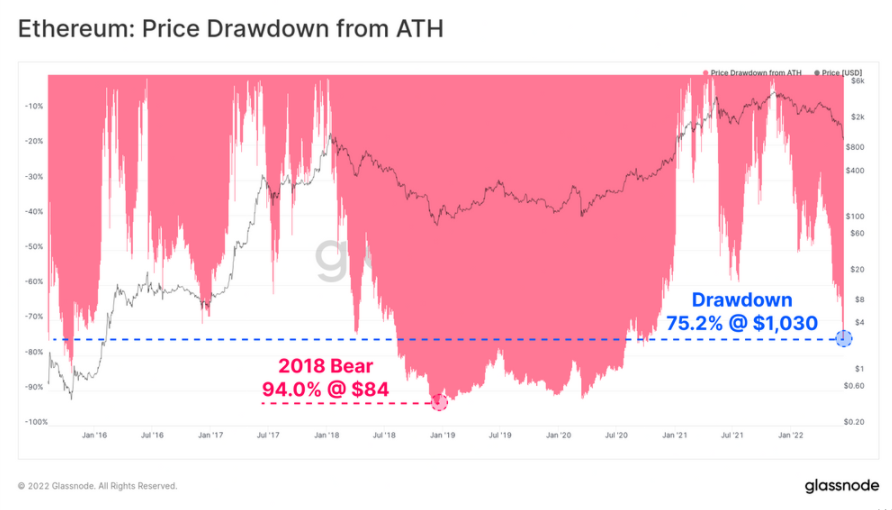 Average Gas Price has recovered slightly in recent weeks, but this is more likely due to congestion caused by slower block intervals (purple) due to the difficulty bomb encountered by the upcoming merge upgrade.

The graph below shows the dominance of gas usage for stablecoins (blue) and DeFi applications (green). Stablecoin transfers and DeFi protocols now account for 5.2% and 10.2% of current Ethereum gas usage, respectively.

This usage advantage has been steadily declining since the market high in May 2021, with stablecoins and DeFi accounting for 11.4% and 33.4% of gas usage, respectively. This is partly due to the crowding out of the NFT boom in the second half of 2021, but also indicates that demand conditions are declining. 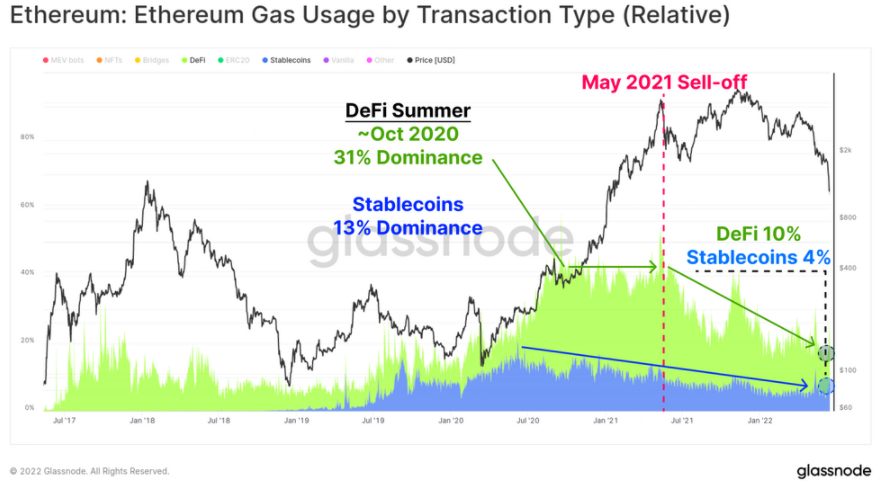 The recent drop in NFT gas usage may indicate that macro-turn investors are increasingly reacting negatively to market volatility. 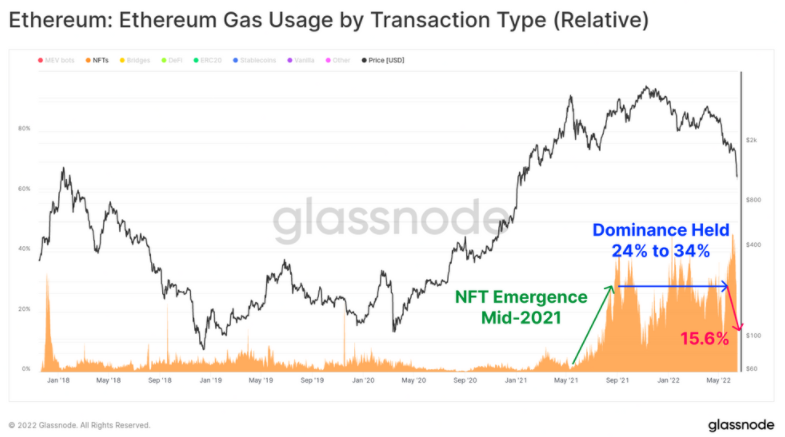 A similar observation can be made for NFT transaction volumes. The chart below shows the volume of OpenSea (blue) and LooksRare (orange) denominated in ETH, which will be between 50,000 ETH and 100,000 ETH per day for most of 2022.

However, starting in May of this year, the trading volume has dropped sharply and is currently holding just over 22,000 ETH/day (~$24.2 million/day). In many aspects of the Ethereum ecosystem, demand conditions have been weakening, general app usage has declined, network congestion has eased after the November 2021 ATH, and the NFT market has cooled more markedly in recent weeks.

One of the more popular metrics in the DeFi ecosystem is Total Value Locked (TVL), which attempts to track the value of tokens denominated in USD or ETH across various DeFi protocols. These include cryptocurrency markets, lending protocols, decentralized exchange liquidity pools, and more.

A popular use of DeFi protocols is to gain leverage, often by borrowing dollar-based stablecoins against cryptocurrency collateral. In many cases, this leverage is then traded and/or re-deposited into DeFi protocols, creating a form of on-chain rehypothecation.

There has been a dramatic loosening of TVL in DeFi protocols as capital has increasingly taken safe-haven positions. This is the result of two main mechanisms: leveraged and recursive borrowing positions accumulated in the market during bull markets are liquidated, either at the discretion or through liquidation.

Ethereum’s TVL has dropped by $124 billion (60%) over the past six weeks, bringing the total TVL down to $81 billion. During May and June, this liquidation took place twice, first at $94 billion during the collapse of the LUNA project, and then at $30 billion in mid-June. 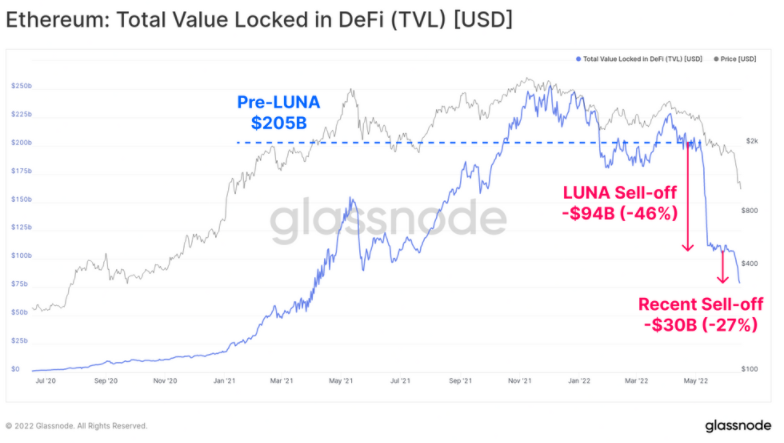 The last two TVL refreshes were the most significant in the past 18 months. The recent sell-off prompted TVL to contract by 27% in a week.

By this metric, there have only been two larger deleveraging events, the first related to the recent LUNA crash, which lost 46.0%; 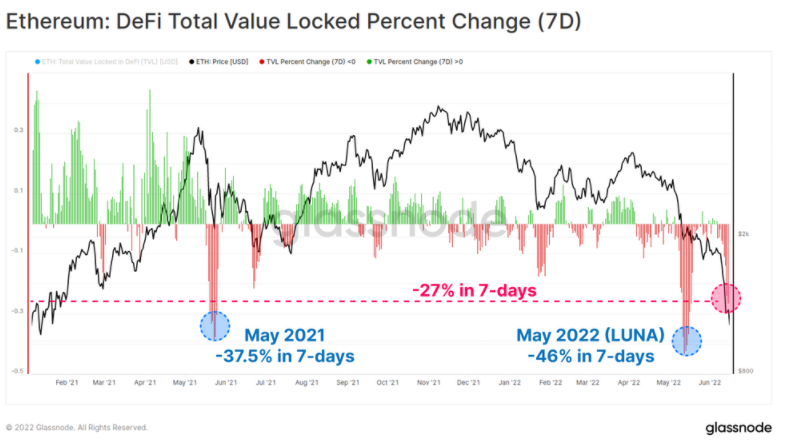 Since the beginning of May, total stablecoin redemptions have reached $9.92 billion, with total capital flowing out of the market. USDT had the largest redemption amount at $13 billion, followed by DAI at $2 billion, leveraged (or liquidated) by investors through the MakerDAO vault.

Interestingly, USDC supply has grown by $5 billion since May 1, indicating that the market’s preference for stablecoins may have shifted from USDT to USDC. 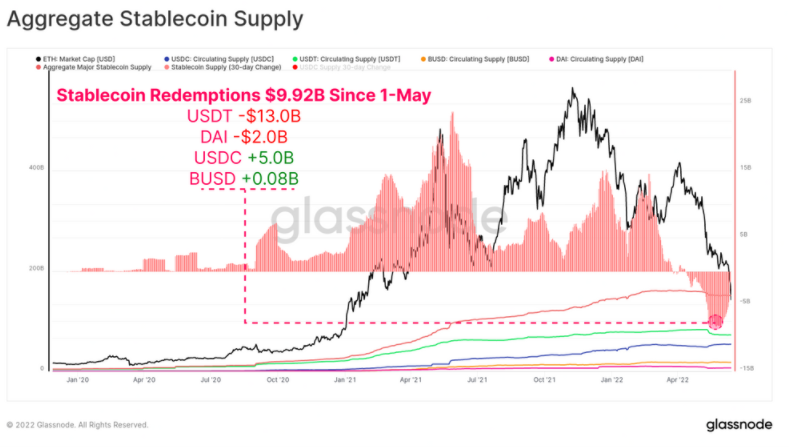 This is the first time such an event has occurred, and this event observed the structure of the digital asset market from three perspectives:

1. The sharp rise of USD stablecoins as a unit of account and a quoted asset;

2. How strong the demand for USD-denominated liquidity has been in recent years. We note that stablecoins now account for three of the top six digital assets by market cap;

3. The absolute depreciation of the Ethereum ecosystem valuation during 2022.

Note that not all stablecoins are hosted on Ethereum, and some are borrowed from DeFi protocols. Nonetheless, the event highlights why the current deleveraging is taking place as the gap between the value of cryptocurrency collateral and the unit of account for margin debt (USD stablecoins) widens. 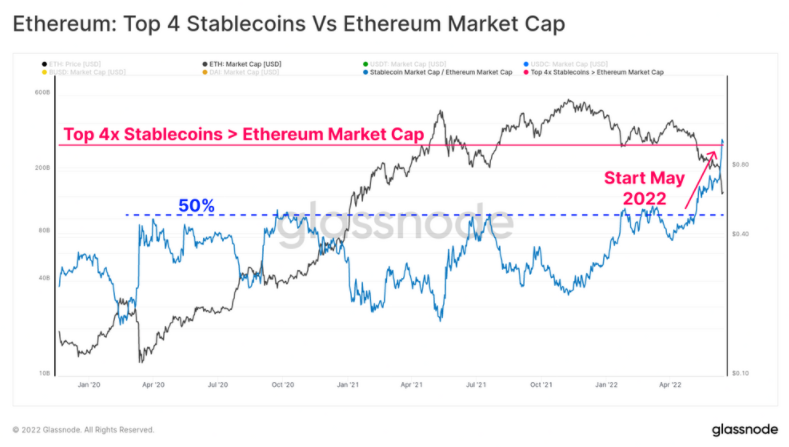 With the ETH spot price currently at $1,212, the total market is now well below the actual price of $1,730. This means that the market’s average unrealized loss is -30.0%.

If we specifically target ETH 2.0 depositors, we can directly measure the value of ETH tokens at the time of deposit, since they cannot be uncollateralized. On this basis, the realized price cost basis for ETH 2.0 savers is much higher at $2,400, resulting in an average unrealized loss of -49.5%.

Notably, some of these deposits will be tied to liquid staking derivatives like Lido’s stETH, which does allow individual investors to sell assets without affecting the actual price of the original deposit. % of supply in profit (blue) and addresses (pink) are two high-level on-chain metrics that measure the current financial health of the Ethereum market versus past cycles. Network profitability is now at its lowest level since June 2020, when the market was recovering from the market crash caused by the pandemic.

Both supply and address profitability suggest that roughly half of ether holders are under-held. Note that profitability at the 2018, 2019 and 2020 bear market lows was as high as 23% of supply and only 2.8% of addresses were profitable. 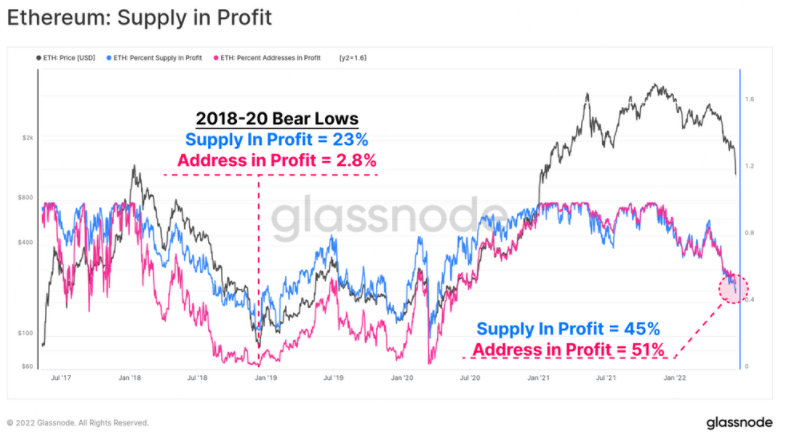 We can also investigate the total unrealized profit and loss of long-term ether holders who hold their tokens for about 5 months and are the least likely to spend on a statistical basis.

The Long-Term Holder Net Unrealized Profit and Loss (LTH-NUPL) metric shows that the group’s current profitability has exceeded break-even, with current unrealized losses equal to 23% of market capitalization. This means that even the strongest and longest-lasting ETH investors, on average, now have their positions underwater. The last time this happened was in September 2018, before a deeper capitulation, when the price fell 64% from $230 to $84. With such a large unrealized loss held by the Ether holder base, we can turn to spending behavior to see the magnitude of gains and losses locked in on actual spending.

In early May, the LUNA-fueled sell-off remained an all-time high for ether investors to realize a net loss, with $2.85 billion in capital outflows in a single day. The current deleveraging followed with a loss of $2.16 billion on June 14. Finally, we can look at the relative Ethereum On-Chain Transaction Profitability Metric (SOPR) to see how the overall market achieves profit and loss. This also confirms that the ether market could turn into a bear market as early as January 2022, when relative losses begin to dominate spending behavior.

Similar behavior can be seen in May 2018, when the deep bear market took nearly 2 years to recover from, culminating in the March 2020 sell-off. Current trade profitability suggests that ETH trades lock in losses of -13.5% on average. While significant and in line with past ether bear markets, this is still low relative to the -20% to -22% losses achieved at the bottom of the 2018 bear cycle. 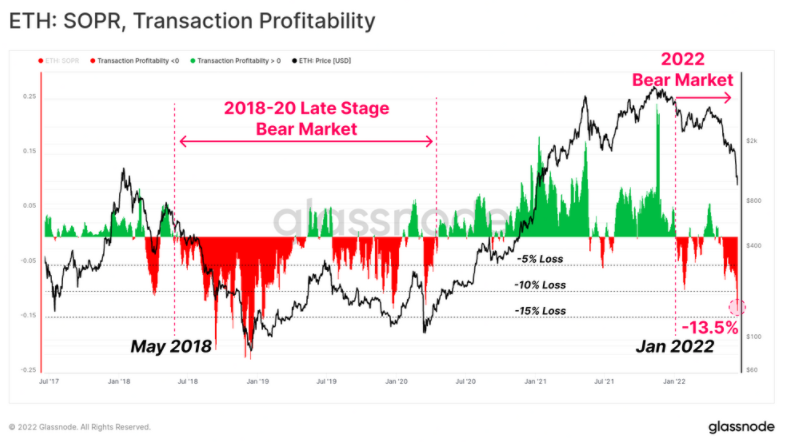 In the 2020-2021 bull market for digital assets, with a plethora of innovations and new products launched in the DeFi space, Ethereum continues to lead the way as the primary underlying platform. However, with innovation and adoption came the accumulation of leverage, margin debt and excessive speculation.

As market valuations plummet through 2022, the value of cryptocurrency collateral has plummeted, creating an unsustainable differential relative to borrowed dollar stablecoin capital. The result was a historic massive deleveraging in the DeFi space, with total value down $124 billion (60%) in just six weeks.

The ethereum holder base is now completely under water, with altcoins experiencing severe unrealized losses, with historically large losses locked in in recent weeks. This suggests that there is a high level of financial pain among the investor community, which, while scary, has not yet reached the extreme lows of the 2018 bear market cycle of declining profitability and prices.

Overall, the ongoing deleveraging episode is clearly painful, akin to a mini-financial crisis. With this pain, however, we have the opportunity to flush out excess leverage and allow the other side to make a healthier rebuild.

(The above content is excerpted and reprinted with the authorization of partner Mars Finance, original link | Source: Ostrich Blockchain)

This article Glassnode data: DeFi has embarked on the road of “deleveraging” first appeared on Blocker.