From June 7th to June 18th, the cryptocurrency market and NFTs plummeted, and this week, the NFT market is gradually rebounding. So, in the market lows, which NFTs did the giant whales buy, and what strategies did they adopt? Which giant whales participated in this low point buying, and what is the bottom-hunting combination and average bottom-hunting price of giant whales? This article will take you to find out.

The cryptocurrency market has been in a downtrend since the first half of this year. During the period from June 7th to June 18th, the price of Bitcoin continued to fall, with a two-week drop of more than 40%. Affected by Celsius, Ethereum also fell below $1,000.

Similarly, the NFT market has been affected, and OpenSea’s trading volume has been on a downward trend recently, but we saw a change in trading volume during the period from June 7th to June 18th. In the downtrend, the NFT market still generated a large number of transactions for a short period of time, during which a large number of changes occurred, so we selected this time range as the analysis range this time.

Which NFTs did the giant whales copy?

In addition to blue-chip NFTs, we see that there are also some non-blue-chip NFT projects in the middle, such as the second-place tubby cats by tubby collective. The giant whales bought a total of 104. From the data on the chain, most of these NFTs are single giant whales. The reason for the large number of purchases may be that the giant whales are absorbing chips and laying out Zhuangzhuang. Most whales executed their NFT trading strategies even when Bitcoin fell 40%. 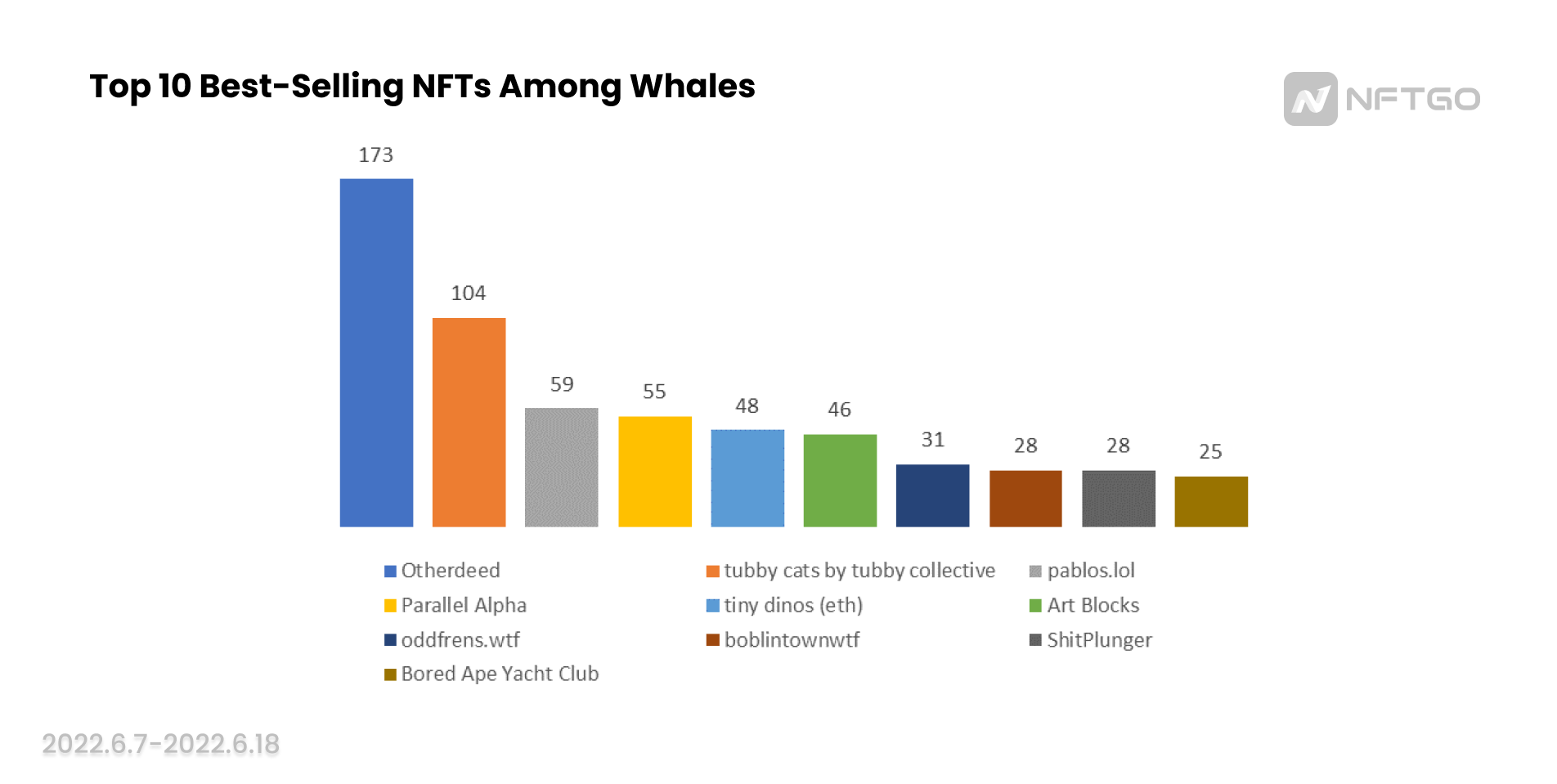 Calculated by the number of purchases * the current price (USD), the top ten NFTs purchased by giant whales are again obtained. This ranking seems to be more in line with the consensus of the NFT market. From June 7th to June 18th, when Bitcoin almost halved, the giant whale group bought Bored Ape Yacht Club for $4.5 million, CryptoPunks for $1.88 million, and Otherdeed for $1.72 million.

It is worth noting that the top three are still the NFT series under Yuga Labs, and the first place Bored Ape Yacht Club purchased more funds than the second and third combined. Obviously, when the market fell sharply, the giant whale Buying preferences are: Bored Ape Yacht Club > Yuga Labs Other NFTs > Other Blue Chip and Emerging Projects. 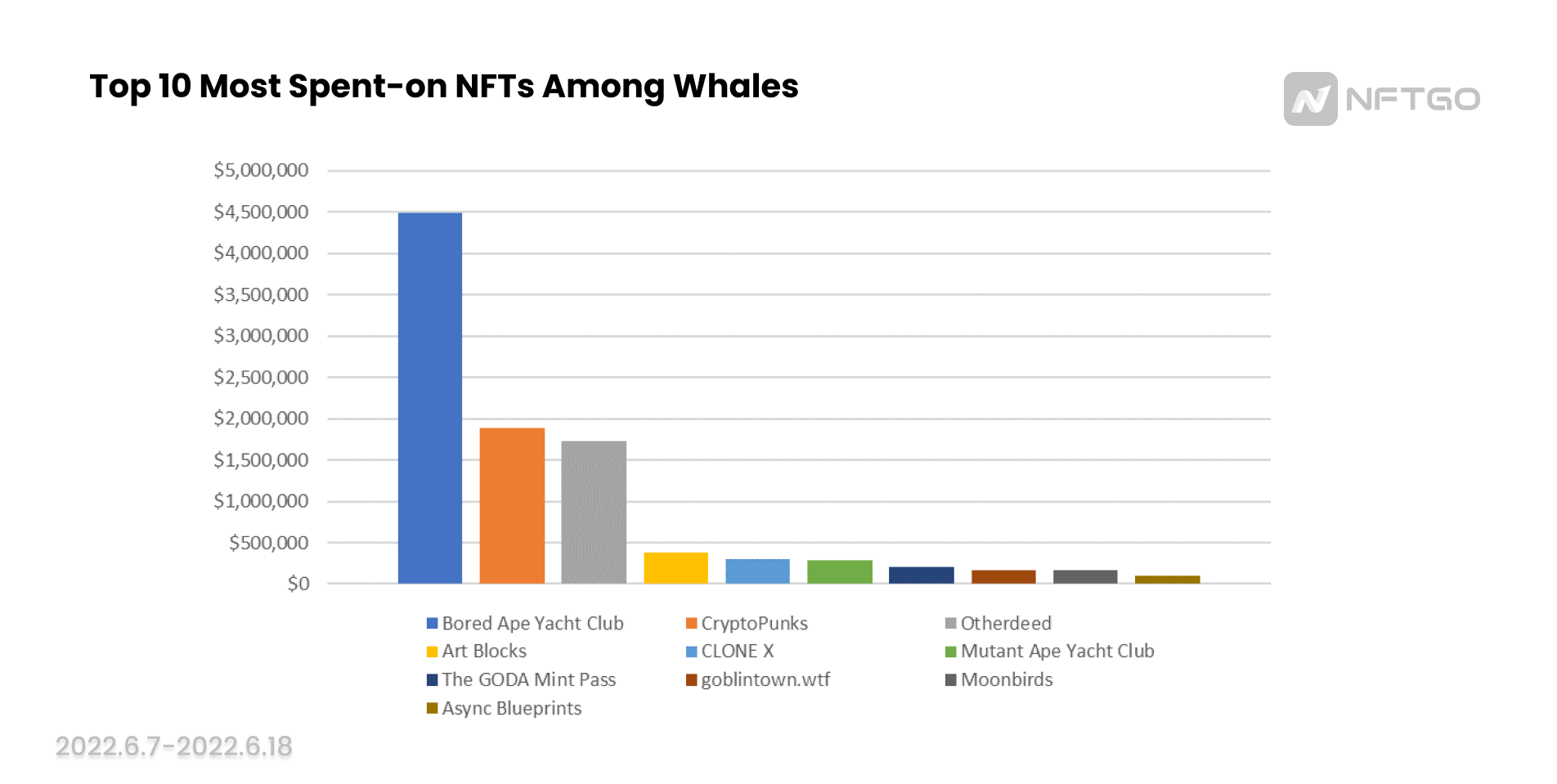 Which giant whales made bargain hunters?

Since the price of Ether fluctuated greatly during this period (June 7th to June 18th), we chose the U standard to observe which giant whales purchased the most funds. As shown in the figure above, there are 5 super whales who have bought NFTs of more than 500,000 US dollars. Among them, the top three types of NFTs are relatively simple. For example, btok1024.eth ranks first, and only one Bored Ape Yacht is bought. Club and spent 1024ETH, which is an extreme special case. Second place franklinisbored.eth bought 7 Bored Ape Yacht Club, third place n0b0dy.eth bought 17 Otherdeed. 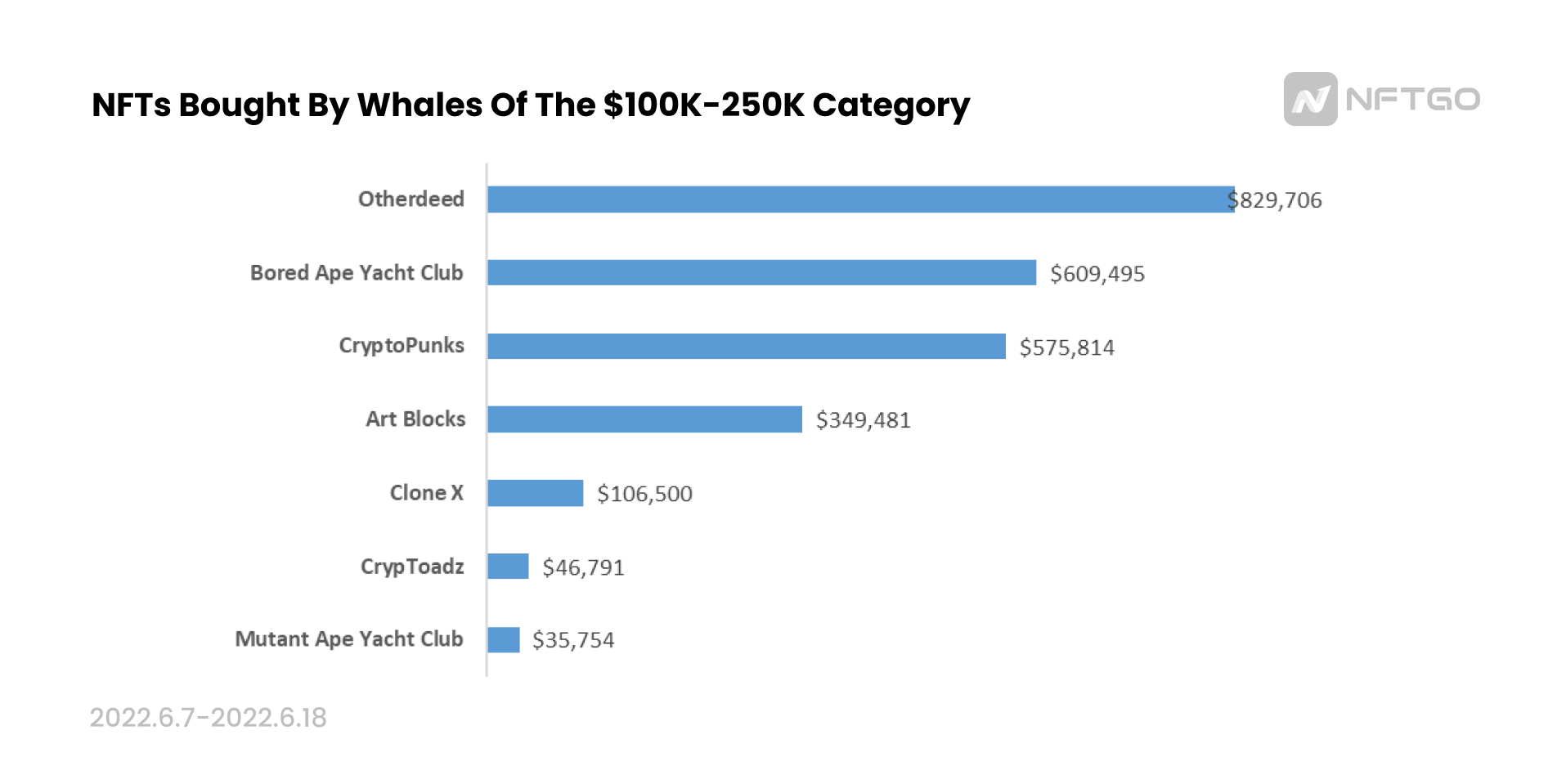 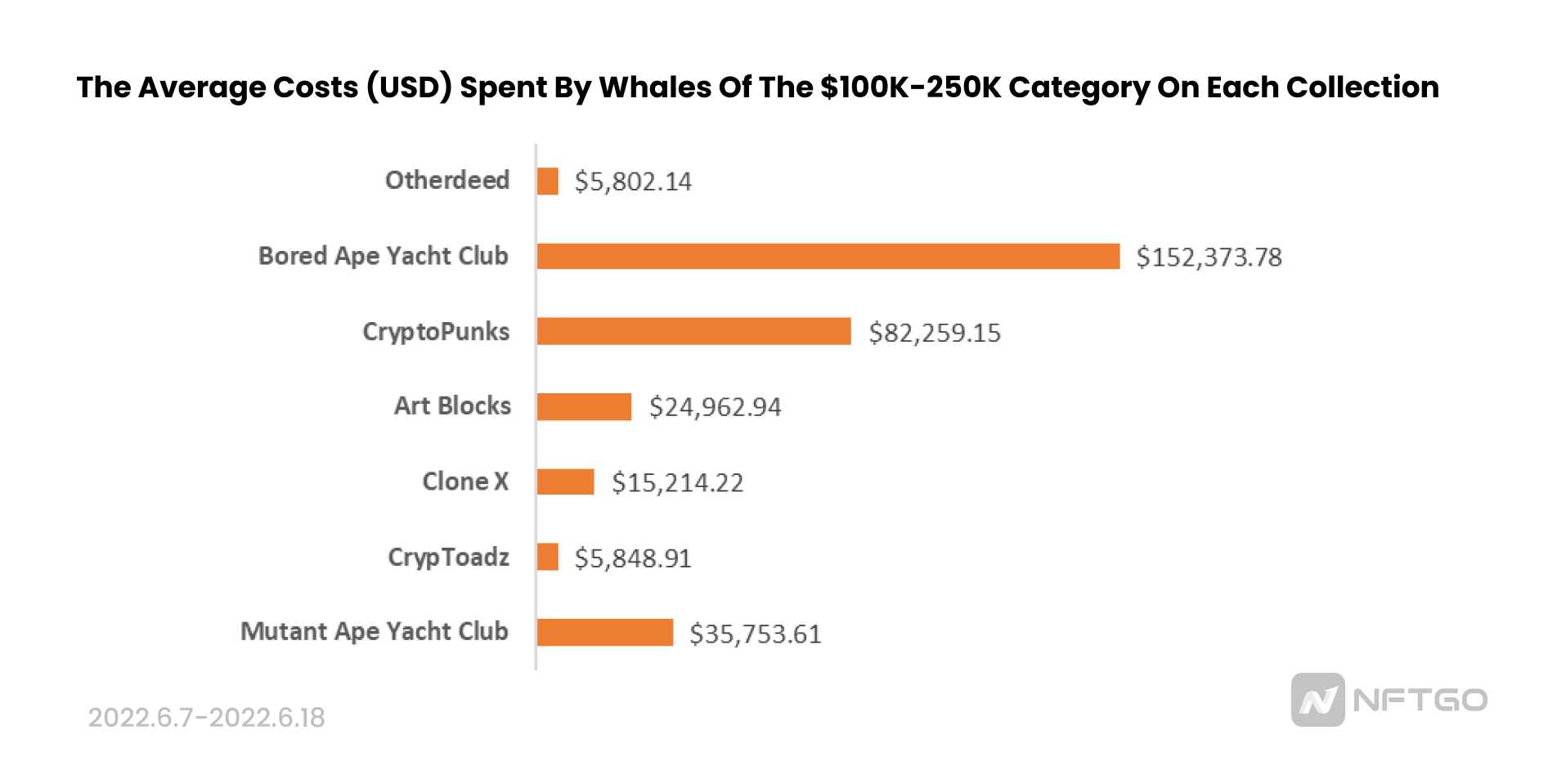 What strategies do giant whales take to buy dips?

Among the top ten giant whales that purchased Otherdeed in the selected time period, the number one giant whale bought 55 Otherdeeds and spent 112.97 ETH, which is converted to a total of about 160,000 US dollars at the time of purchase. As of June 21st, the floor price of Otherdeed is 2.4 ETH. The giant whale has made a profit of 19.25 ETH, and the income is 17%. Let’s see how he used 160,000 US dollars to complete the bottom-hunting. 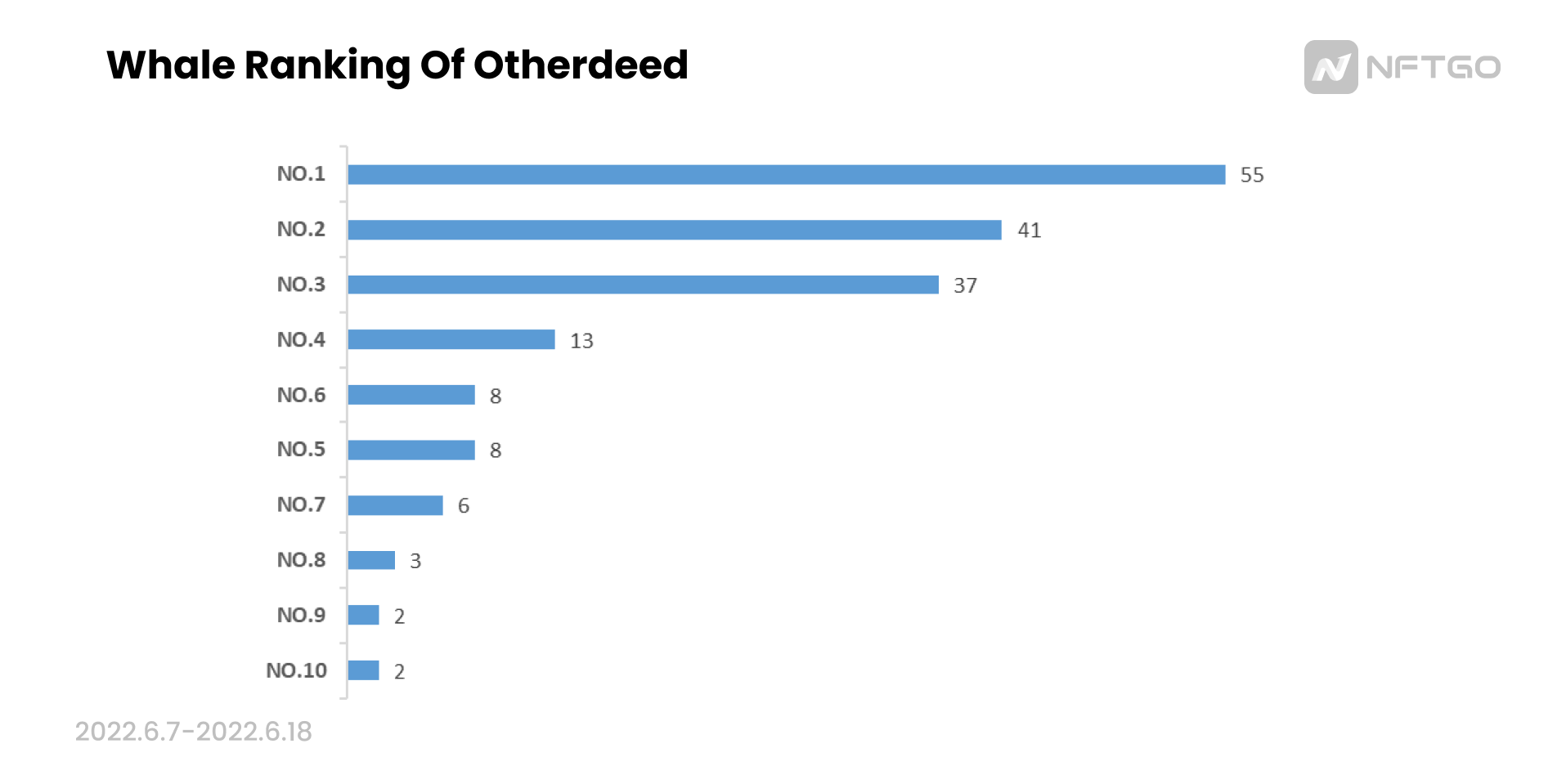 On June 9th, the floor price of Otherdeed fell below 2.5ETH, and he bought 10 Otherdeeds at an average price of 2.368 ETH again, reducing the short-term holding cost to 2.45 ETH.

On June 12th, Otherdeed accelerated to 1.8 ETH. He completed the last batch of short-term additions and purchased 39 Otherdeeds at an average price of 1.89 ETH. At this time, he reduced the total short-term holding cost to 2.05 ETH. 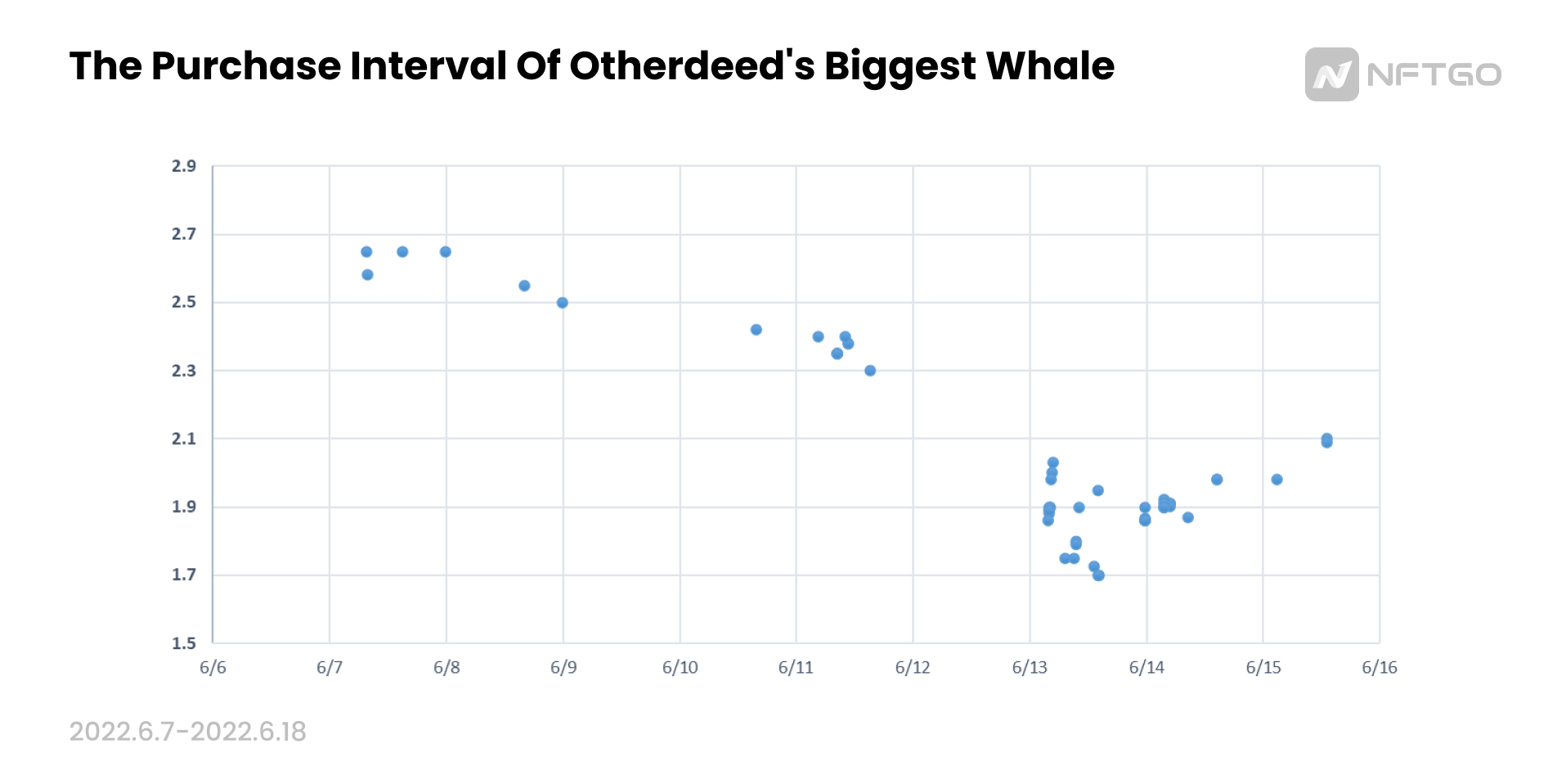 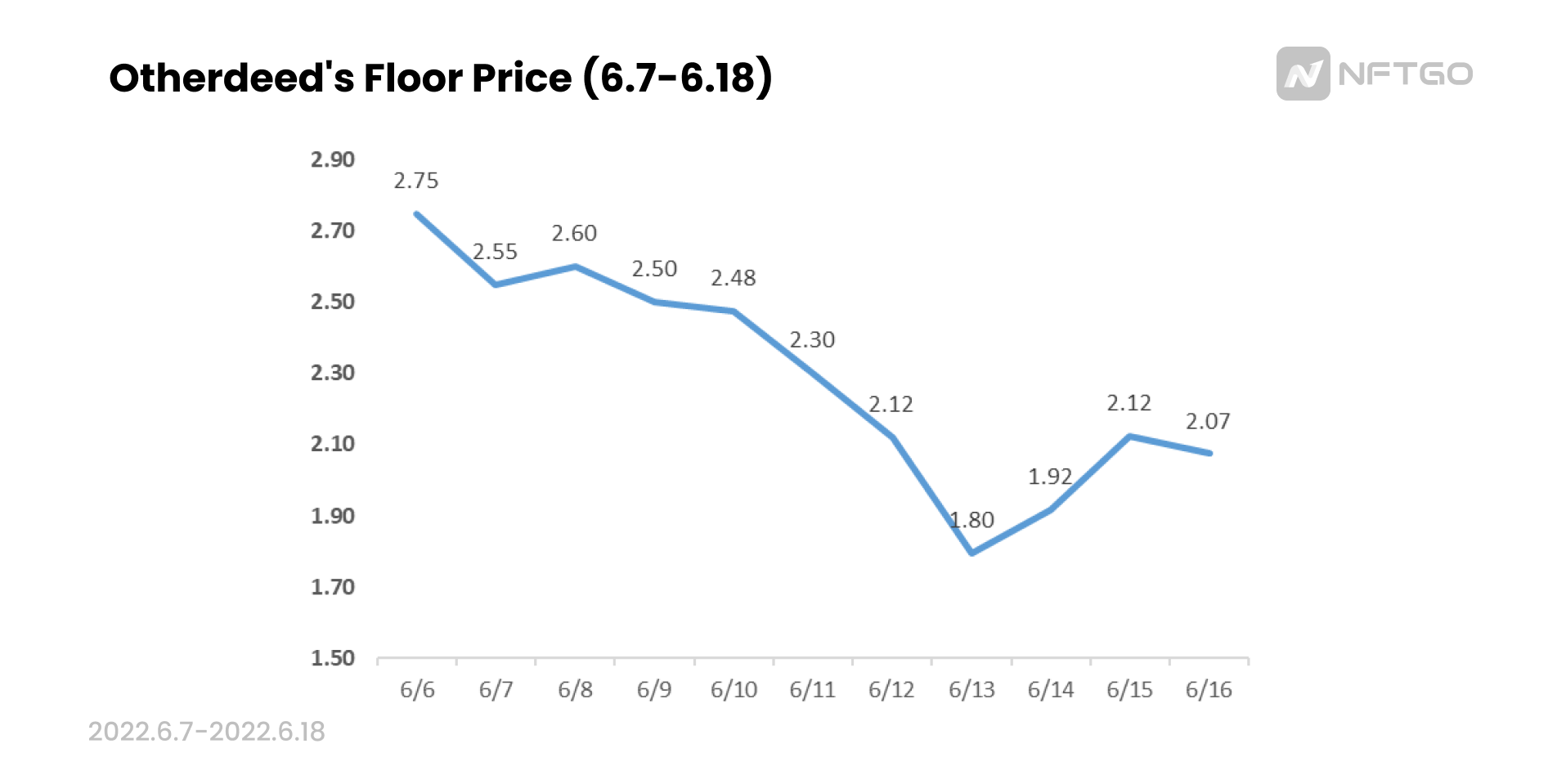 It is worth noting that when the price of Otherdeed began to rise from June 13th to June 15th, he did not lie to win, but chose to continue to buy, indicating that the giant whale has its own valuation judgment for the NFT and believes that the The price is still in its own “buying range”, so you can continue to buy even after the bottom of the price.

One of the more interesting points is that among the 55 dips, he made 34 purchases through offers and 21 through direct purchases. This is his “little coup” for dips, and it also shows that people accept ” The chance of an offer bid” will increase.

Judging from the specific trend of Otherdeed, on June 13th, the floor price of Otherdeed dropped to a minimum of 1.8ETH, and at the same time the transaction volume reached a relative peak, which also confirms that in addition to giant whales, many people also choose here “Buy the bottom” Otherdeed. 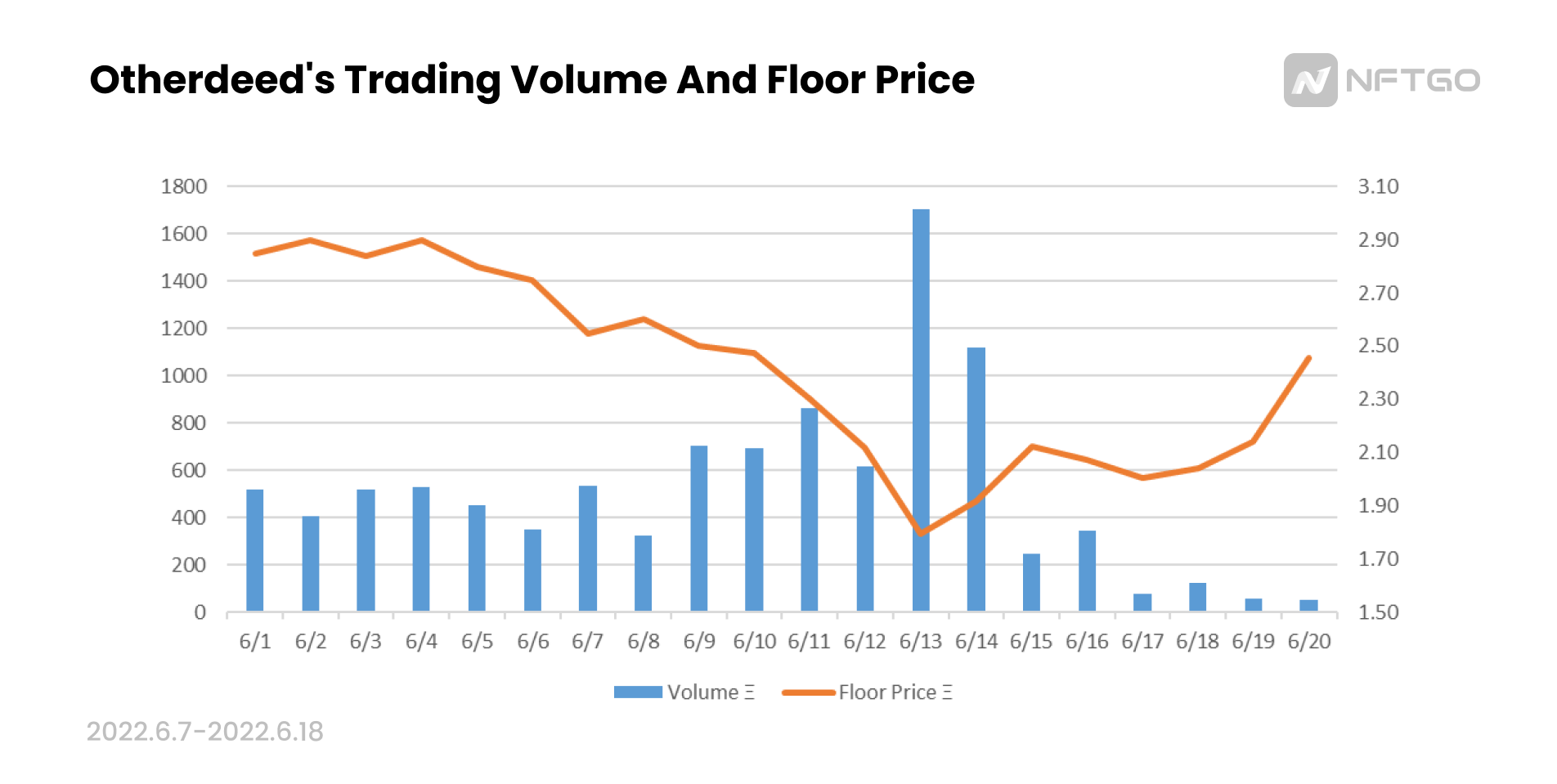 Let’s take a look at the giant whale with the largest number of dips in BAYC from June 7th to June 18th. How did he “buy the dips”. 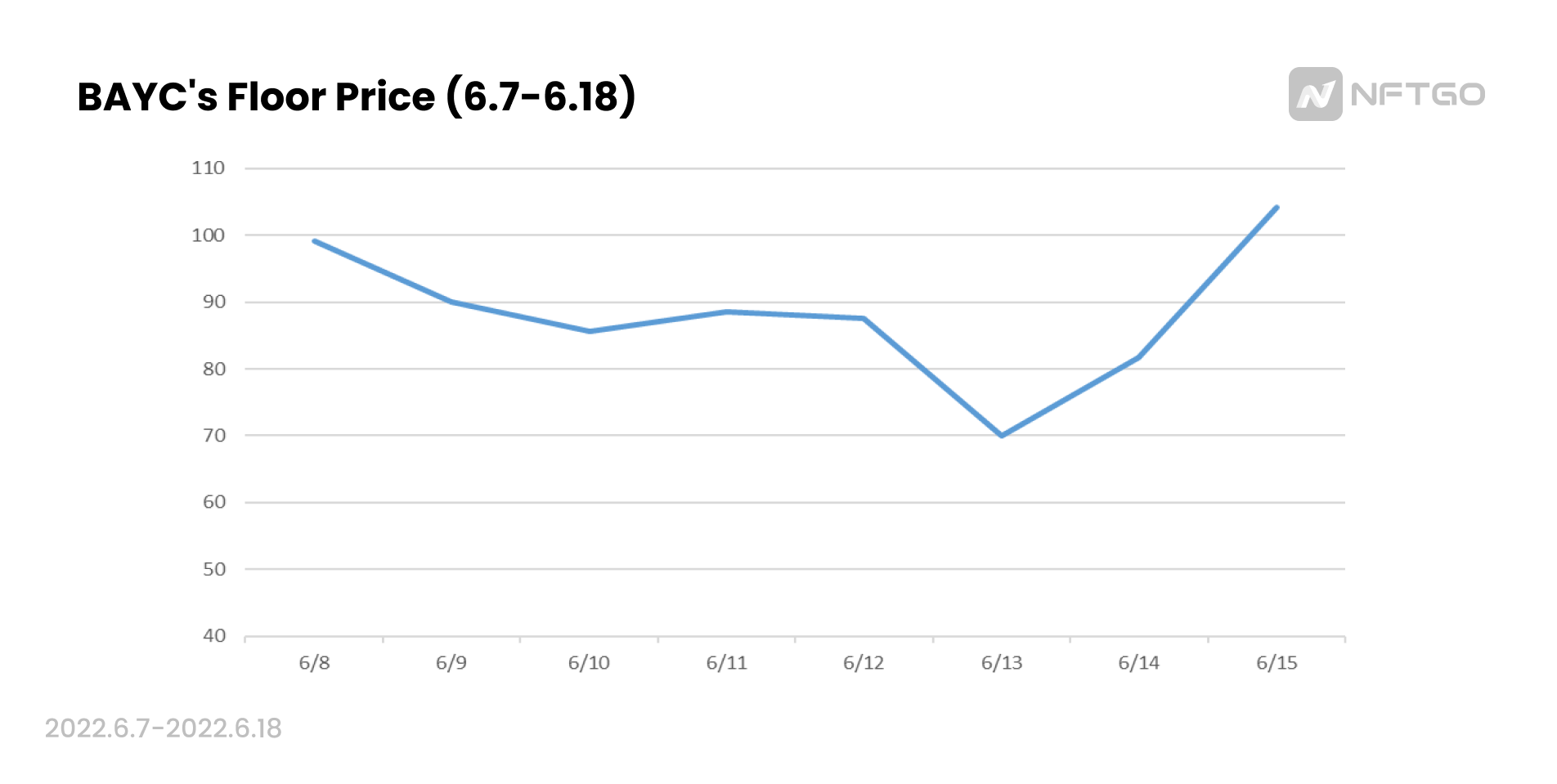 The giant whale uses sub-divisions to buy the floor price BAYC, buys according to the price drop, and buys one by one after the price drop exceeds 10%.

Through the above analysis, we can probably get a few points of the logic of whale bottom-hunting.

For a single NFT, buy in batches (3 batches) according to the interval, and buy when you enter your own valuation interval.
Buy on dips rather than time, the bigger the dip, the more you buy.
Try to hunt for the bottom by making an offer.
Diversified by rarity for big blue chips, and new blue-chip diversified portfolios.
You can try multiple platforms such as X2Y2, LooksRare, not limited to OpenSea.

(The above content is excerpted and reprinted with the authorization of partner Mars Finance, original link | Source: NFTGo)