I jumped on-chain and noticed a key indicator – miner revenue – suggests that Bitcoin may be prepping for an upward move But in isolation, this means nothing. Sample size for Bitcoin is too small, with the current environment the only macro bear market it has seen since launch in 2009 Until risk-off sentiment in wider market dissipates, on-chain indicators should be taken with pinch of salt

One of the most fascinating things about Bitcoin for me is the ability to jump on-chain and track a whole range of indicators. As the years go by and we build up more of a sample of how Bitcoin performs, these metrics become all the more powerful.

Miner actions often provide unique insights into the market. They are often viewed as compulsory sellers because their revenue is in Bitcoin, whereas their fixed costs – electricity, mostly – are in fiat. Obviously, they have to cover these fixed costs and so the issuance of bitcoins from miners will always be intrinsically related to price.

The Puell indicator pretty much tracks when the amount of bitcoins entering the market is too great or too little relative to historical norms. Looking back at it historically, there is quite a strong relationship – the price tends to move upwards when the Puell indicator falls into the green zone on the chart below.

The most recent time the Puell indicator dipped into the “buy” zone was mid-June. Again, we saw upward movement soon after, as Bitcoin had its little rally from about $20,000 up above $24,000. Of course in the last week or so we have dipped back down to below $20,000, as the Fed’s comments on interest rate plans and inflation sparked a wave of risk-off sentiment across all asset classes.

Interestingly, I noticed yesterday that the Puell indicator has dipped back into the “buy” zone. Zooming on the time period since the start of 2020 demonstrates this a bit clearer on the chart. 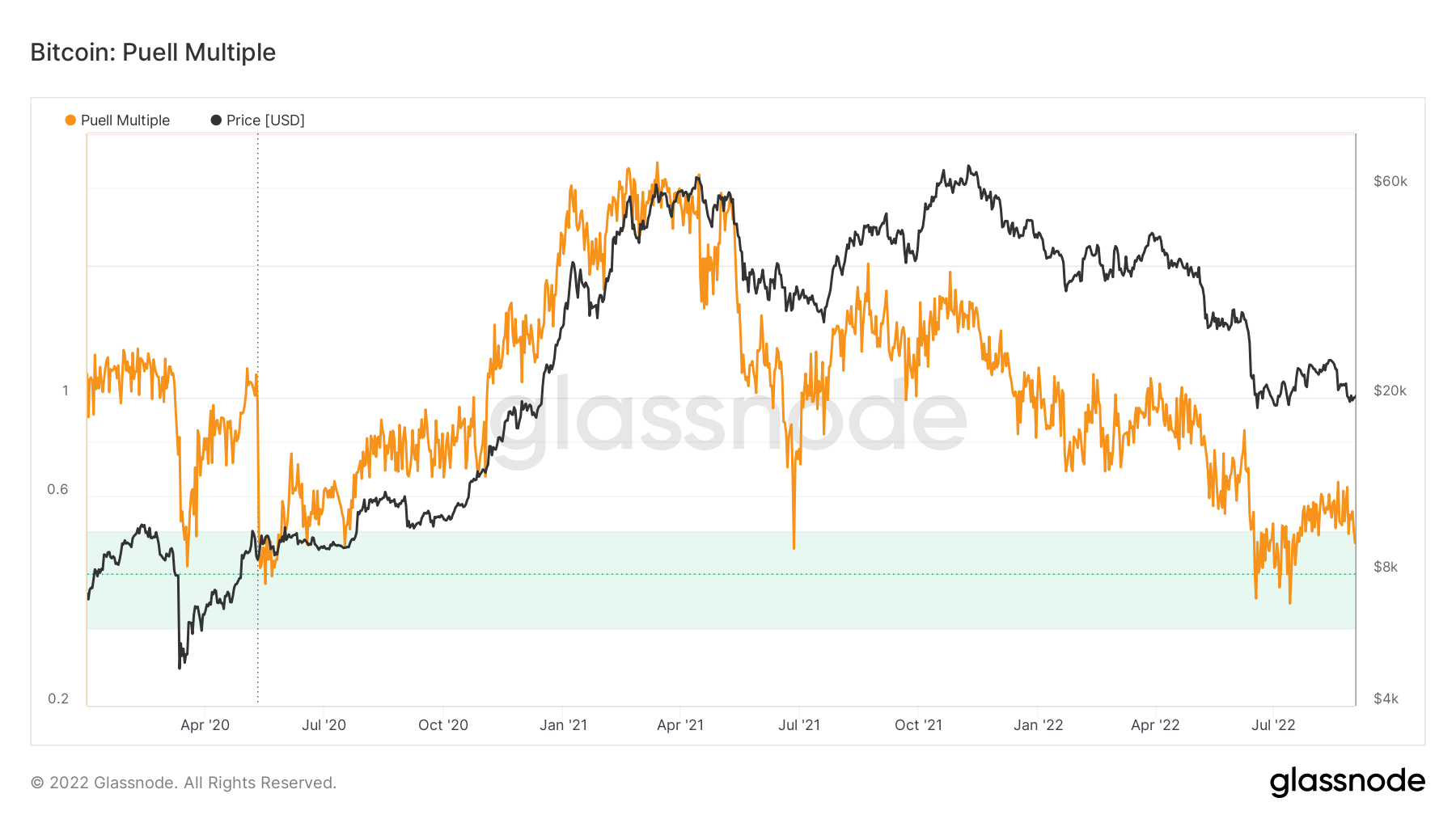 Then again, I’m always hesitant to use on-chain indicators in isolation. This is never more true than in the current climate, where we have an unprecedented blend of a hawkish Fed, rampant inflation and a geopolitical climate growing more volatile by the day.

This is the only time in Bitcoin’s short history that we have seen this macro blend. Indeed, Bitcoin was only launched in early 2009, meaning it has resided during a period of sustained up-only bull market dynamics. The historical sample size of its price action simply isn’t long enough to draw any firm conclusions, therefore.

The way I would ultimately look at the Puell indicator is that Bitcoin seems primed to move upwards IF the macro environment cooperates. But that is a seriously big if. It has been the case all year – and it will continue to be the case – that macro developments are driving markets.

Bitcoin is following the stock market, which is following the news in the inflation, interest rate and geopolitical sectors. So while this is a bullish on-chain indicator for Bitcoin, it means nothing until we get further cooperation in the wider world.