Bitcoin has been trading below its actual price for more than a month, and there are many signs that Bitcoin has experienced an outright sell-off at low levels. Therefore, Bitcoin has completed the “bottom building” in the true sense.

This week, the Bitcoin market saw a brief upside rally, bouncing from $18,999 to the upper end of the consolidation range at $21,596. Markets were volatile earlier this week as headline U.S. CPI inflation hit a 40-year high of 9.1%. In addition, rising civil unrest, rising energy prices, and scarcity of resources in many countries around the world also challenge current market trends.

Against this backdrop, the slump experienced by Bitcoin and the broader digital asset market was one of the worst and fastest price declines in its history. The slump wiped out a lot of excess leverage in the system and pushed the price of Bitcoin below its cash-out price (the estimated base cost for BTC holders).

In this article, we examine the current Bitcoin market structure from the perspective of unrealized (coins held) and realized (coins spent) losses across various participant groups. The purpose of the study was to measure whether there is still similar sell-side weakness compared to previous bear cycle lows. These tools can help build the case and gauge the chances of a bear market bottoming around $20,000. 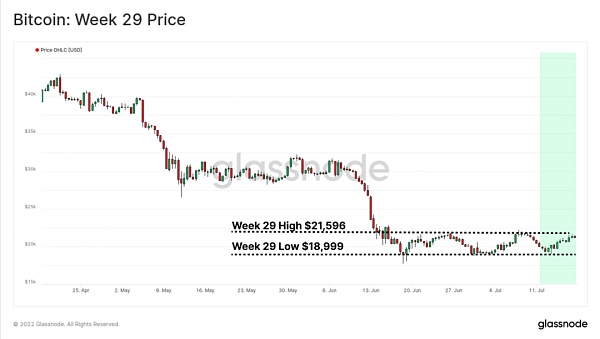 Bitcoin: The price of the twenty-ninth week

Before starting this article, we will first define what “realized value” and “unrealized value” mean, as these concepts will form the basis of subsequent insights.

Unrealized value (unspent coins) is the difference between the current value of the cryptocurrency and the value at the time of the on-chain acquisition. In the example above, if the participant still held 0.5 BTC and it was trading at $21k, they would hold an unrealized loss of 0.5 * ($2.1 – $40k) = -$9500.

Realized value is one of the most widely recognized on-chain models of Bitcoin and is often considered to be Bitcoin’s on-chain purchase price (basic cost). It is currently trading at $22,092 compared to the current spot price of $21,060, which puts the average unrealized loss of Bitcoin participants at -4.67%.

The chart below shows how previous bear market cycles bottomed out and established an accumulation zone below the realized price. The time below the actual price ranged from 7 days in March 2020 to 301 days in 2015.

If we exclude March 2020 (the flash event), the average time that Bitcoin’s current price is below its actual price is 197 days, compared to only 35 days in the current market. Bitcoin: days below the cashed price

A higher MVRV ratio (>1.0, orange) implies a greater degree of unrealized profit being held within the system. Historically, values ​​above 3.0 have signaled an overheated bull market. A decrease in the MVRV ratio (blue) means a decrease in the profitability of the system. This is the result of a drop in price (lower market cap) and redistribution of bitcoin as participants profit and sell bitcoins acquired at lower prices to new sellers at higher prices (higher realised value). Due to this mechanism, a large bearish divergence can be seen between April and November 2021 (shown in blue on the chart). A low MVRV ratio (<1.0, red) means that the market price is lower than the average purchase price of participants on-chain. This is the typical late stage of a bear market and is usually associated with bottom formation and accumulation.

The MVRV ratio is currently at 0.953 (-4.67% unrealized loss), which is not as high as the 0.85 (-15% unrealized loss) average seen in previous bear market cycles. This could mean further downside and/or consolidation time is needed to establish a bottom. However, it may also indicate that participants have gained a greater degree of investor support in this bear market.

Reminder: MVRV breaking above 1.0 will signal that the price is breaking above the realized price, which is an indication of underlying market strength. 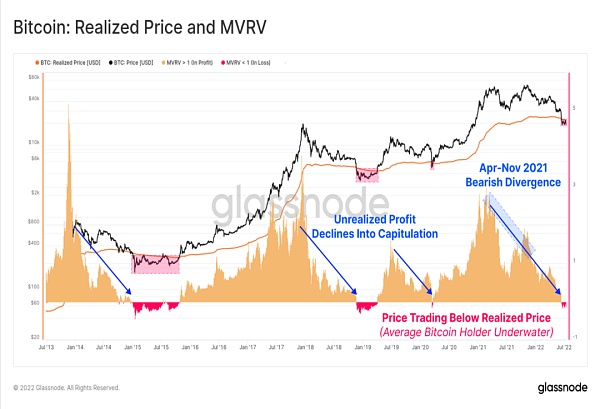 In addition to cashed prices, we have a few supported on-chain pricing models that tend to affect spot prices late in bear markets.

Both the 2015 and 2018 bear market lows were determined by short-term declines in Delta Price (green zone). However, as shown in blue, the two accumulation ranges traded between the equilibrium price (range low) and the cash price (range high) most of the time during the bottom formation process.

Reminder: A price break below $17,545 would signal a break below the equilibrium price and potential market weakness. 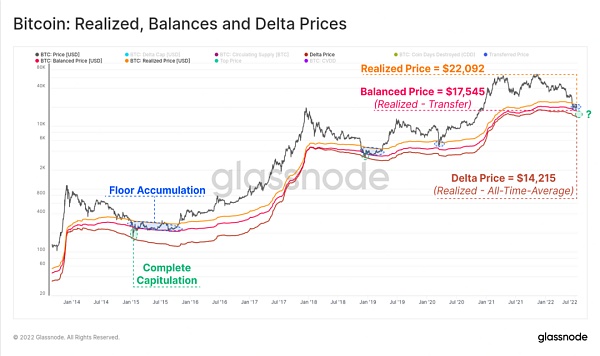 Market bottom formations are often characterized by large positive swings in unrealized gains and losses. This is the result of the sell-off and reallocation of Bitcoin to new buyers who are less sensitive to current price fluctuations.

Therefore, we can first exclude only those bitcoins holding unrealized losses (2021-22 cycle buyers) to calculate their total dollar value. Markets traded between $17,600 and $21,800, with total unrealized losses ranging from -$165 billion to -$198 billion.

Note that the total unrealized loss of ATH (the highest value ever) is much larger after November compared to the May-July 2021 period, even at its price of $29k (blue) . This is the result of Bitcoin’s redistribution during and after the August-November rally, and it’s the same mechanism that created the bearish MVRV divergence.

This generally confirms that the August-November rally was more of a “bear market remission” rally than a bull market resumption. 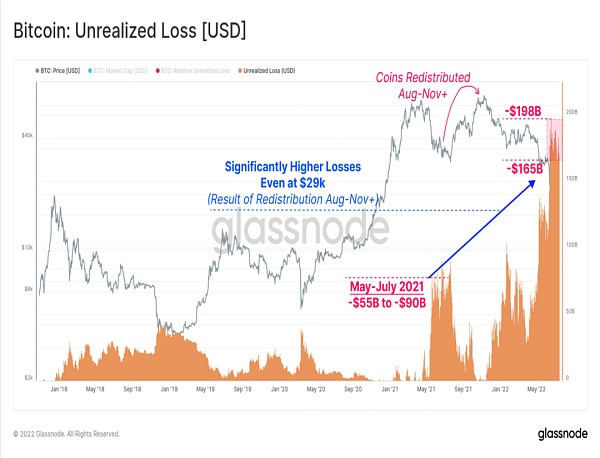 Bitcoins are sold during sell-offs and bought by buyers with lower time preference. Losses transition from unrealised to realised. As a result, Bitcoin is revalued to a new and lower base cost and becomes the owner of another asset. 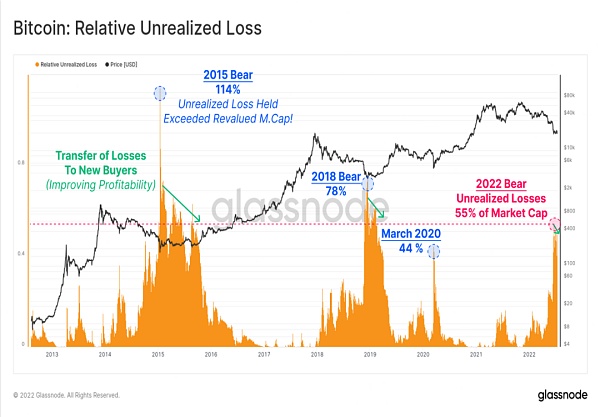 Examining the BTC total profit supply can support this argument. When the price fell to $17,600, there was an unrealized loss on the total of 9.216 million BTC. However, following the June 18 sell-off, after a month of consolidation, the price has risen to $21,200 and the volume has dropped to 76.8 billion BTC. 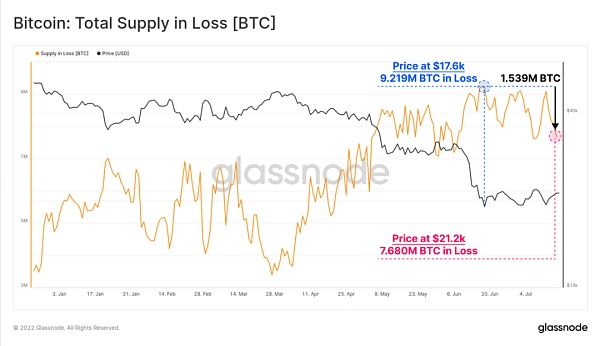 We can also examine Bitcoin holding unrealized profits from the perspective of long-term and short-term holders. We can see that all previous bear market lows have reached a point where short-term holders are effectively not profitable when the market dives well below their takeover price.

Analysts can monitor a strong market recovery to see if profits for short-term holders will balloon quickly if prices move back out of a consolidation range. Events like this occur at every major bear market bottom (green) as participants in the sell-off transfer bitcoin to new buyers who have a lower cost base and are therefore less price sensitive. Bitcoin: Supply for Long and Short Holders in Profit and Loss

In order to establish a market bottom, Bitcoin participants typically need to experience a broad sell-off. This will cause all remaining marginal sellers to be weeded out, effectively drying up sellers.

Two such events have already occurred in May and June 2022, both during the LUNA slump, and on June 18 when the price broke below the 2017 cycle ATH. These events triggered total realized losses of $2.777 billion and $3.55 billion, respectively, over 30 days. As the chart shows, these indices outpace any U.S. dollar-denominated index in history. 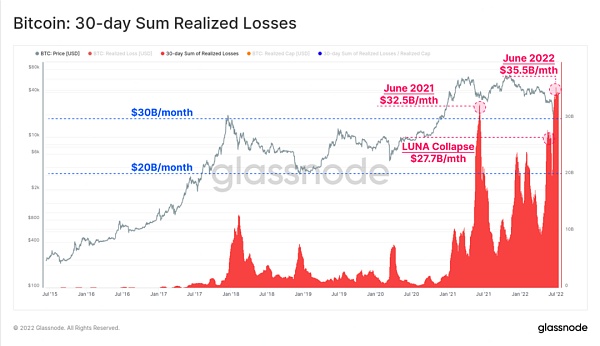 Likewise, bitcoin-denominated losses were so large that we had to look back to 2011 when bitcoin was trading below $3 to find a similar scenario. Between May and July, a large amount of Bitcoin was locked in realized losses — 538,000 BTC during the LUNA crash, and another 480,000 BTC on June 18. ASOPR (Spend Output Profit Ratio) returning to above 1.0 (above 1.0 in a rational case) would help support the above observation that a complete sell-off has occurred, accumulation is underway, and the market is recovering well.

Reminder: The 14-day SMA of the aSOPR indicator broke above 1.0, signaling the return of earnings spending and a potential market recovery. 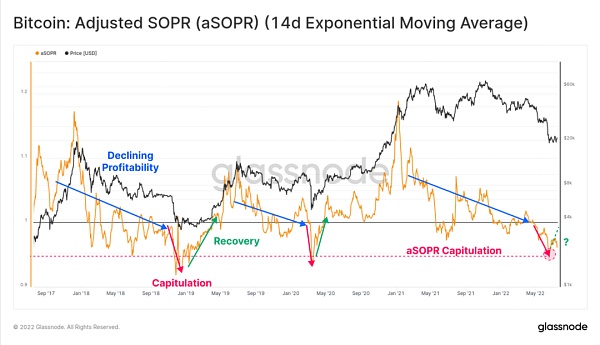 The ratio of transfer volume to profit also has a market structure similar to previous bear market lows. During the 2015 and 2018 sell-offs, users lost more than 58% of their transfer volume, and the downward momentum was finally halted after months of bearish price action.

As the market begins to bottom out, a larger percentage of Bitcoin volume has lower underlying costs, and payouts are no longer dominated by panic selling and/or sellers who are forced to sell their assets.

Currently, 54% of transfers are at a loss (46% profit), very close to the level of recovery in 2015/18. Similar to aSOPR, a recovery in this indicator will provide a signal that sellers may have sold out and a recovery may be underway.

Reminder: A profit shifting volume of over 48% in a 90-day MA trade would mark a return to profitability and underlying market strength. 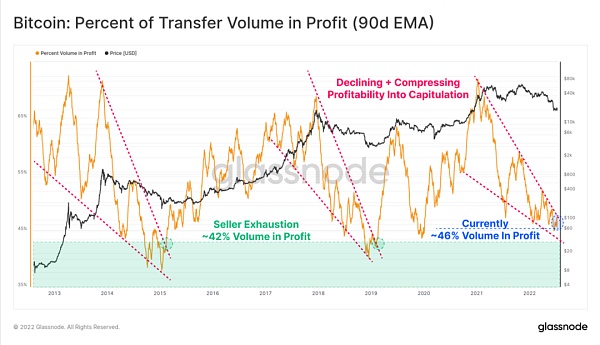 Bitcoin: Transfer amount as a percentage of profit

Before concluding this article, we will discuss the upper bound of the cashed HODL wave, which plots the distribution of dollar wealth stored in Bitcoin over different lengths of storage time. We divide it into two groups: 3 months or less (Hot Money) and 3 months or more (HODLer Money).

The total value of U.S. dollars held by “Hot Money” is in a structural downward trend and has now fallen below 20%. This describes two phenomena:

Older bitcoins have largely slowed their consumption, although these younger coins will inflate (as is the case in bull markets, as long-term participants profit). This is a sign that HODLer maintains a high level of confidence in Bitcoin. Long-term players are gradually accumulating “Hot Money” and taking them out of the market, allowing them to mature in cold storage (as seen in the last two weeks of global exchanges with a history of massive exchange withdrawals). Finally, for the older batch of bitcoins, we can see that more than 80% of the dollar wealth in it has been held for more than 3 months (obtained before the LUNA crash). This trend continues to increase, driven strongly by people who hold them for 6 months to 1 year and 1 year to 2 years. Although the vast majority of sellers who dumped and were forced to sell Bitcoin came from these 6 month to 2 year cohorts.

Again, this marks a near-depletion of sellers in the Bitcoin market. The Bitcoin market has undergone a hard and fast correction in 2022, fueled by the unwinding of overleverage and a plethora of forced sellers and liquidations. In a relatively short seven-month period, Bitcoin fell from all-time highs to bear market bottoms.

Above, we explored the current market structure through the lens of unrealized and realized losses, looking for signs of sell-side weakness. Almost all of the above indicators suggest that the current market is trending similar to most past bear market lows, although they will take time to corroborate.

Against the backdrop of extremely challenging macroeconomic and geopolitical turmoil, Bitcoin is reaching a saturation peak due to the high level of trust among participants, and the confidence of participants in Bitcoin is also increasing, and a real bottom may be forming.

Articles are published for informational purposes only and do not constitute advertising of any kind. In no event shall the information or opinions expressed in this article constitute investment advice to anyone.

(The above content is excerpted and reprinted with the authorization of our partner MarsBit, the original link | Source: Daling Think Tank)

On-chain data analysis in this article: Bitcoin’s “real bottom” may be forming The first appeared in the blocker.