The cryptocurrency market is in a tragic situation after the bear market, and many projects are unsustainable. According to data from Nomics, more than 12,000 coins have been reduced to half-dead “zombies” this year, and the transaction volume is almost zero.

How cold is this wave of “crypto winter”? A recent market research report published by Nomics lays out the specific data. The cryptocurrency data provider found that more than 12,100 cryptocurrencies have not been traded for at least a month so far this year.

These half-dead cryptocurrencies have been dubbed “zombies” by Bloomberg because technically the tokens aren’t dead, but they aren’t active either.

But this year, the situation has changed, with many investors turning away from cryptocurrencies and other risky assets due to high inflation and a poor general economic environment. Jacob Joseph, research analyst at CryptoCompare, commented:

During the 2021 bull market, there will be almost nothing short of new and established projects, and a lot of money, attention, and liquidity are on the horizon. In a bear market, however, even good projects with utilities struggle because they lose access to capital and funding.

According to data from Nomics, the number of coins that have not been traded for a month or more has risen sharply this year from previous years and is roughly double the number over the past five years combined. 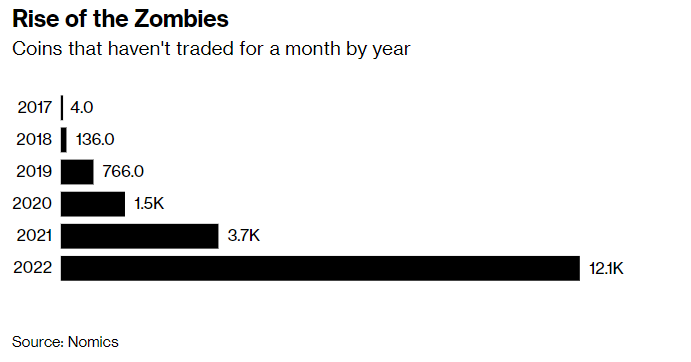 Meanwhile, according to Nomics co-founder Nick Gauthier, of the 64,400 coins tracked by Nomics, only 13,800 had some volume in the current 24-hour period, with some more. Very low coins like Terra Classic (LUNC).

This article bears a miserable bear market! Data: 12,000 coins became “zombies”, and the transaction volume went to zero first appeared in the blocker.