In the third quarter of 2022, the entire cryptocurrency industry fell into a trough, and we saw a series of problems such as increased competition in the market, a decrease in the number of new buyers and sellers, and an increased risk of fraud. At the same time, NFT seems to have withstood the bear market decline. With the entry of multinational companies such as Starbucks, this emerging field has been injected with a lot of vitality. Let’s take a look at the NFT market dynamics in the past period through this latest report!

By the end of the first quarter of 2022, the total transaction value of NFTs exceeded $12 billion, and the sales volume reached 28 million. However, entering the second quarter, with a series of events such as the collapse of the Terra ecosystem and the ensuing CeFi liquidation, the transaction value of the NFT market fell by 33% ($8 billion) and the sales volume fell by 29% (2023). million).

While investors with large portfolios (often referred to as “whales”) are still driving NFT sales, the increase in the number of new buyers shows that there are still many people who are curious about NFTs and want to add to the asset class. big investment. 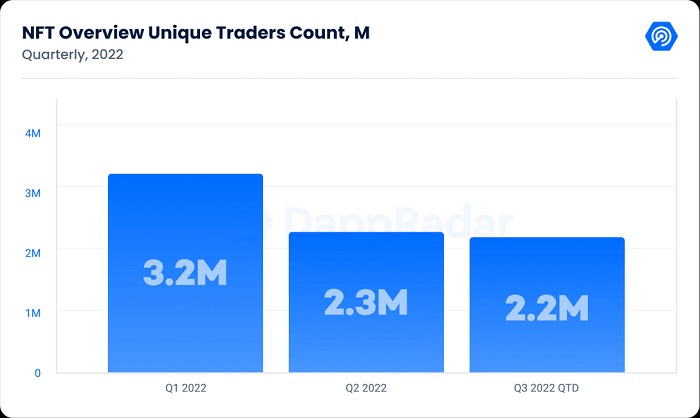 We have reason to believe that, similar to works of art, NFTs can also be an asset class that properly stores value. Since Terra crashed in May, even in a bear market, the top 100 Ethereum on-chain NFT holdings have only lost 50% of their dollar market cap. 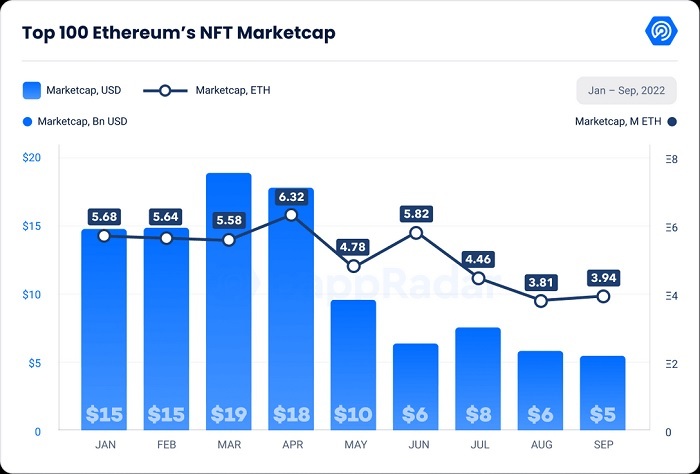 Next, let’s delve into the state of the field and subsequent trends by analyzing some of the blue-chip projects in the NFT category. In terms of public chains, Ethereum is still the blockchain network that generates the most NFT transactions, providing huge support for the vaguely most valuable NFT assets and innovative markets and aggregators (such as OpenSea, X2Y2, Gem, etc.), and the third Quarterly NFT transactions on the Ethereum chain accounted for 91% ($645 million) of total network NFT transactions.

Q3 2022 saw a 93% drop in transaction volume compared to the same period last year, but CryptoPunk #5822 was a bright spot during the period with a record 8,000 ETH (~$23.7 million), the sale of CryptoPunks The largest transaction in NFT history, the NFT was purchased by Chain CEO Deepak Thapliial (Deepak.eth). 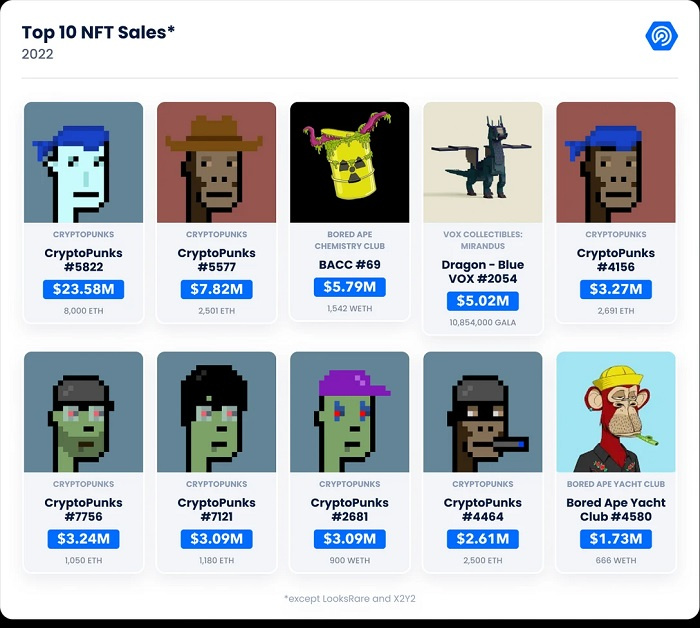 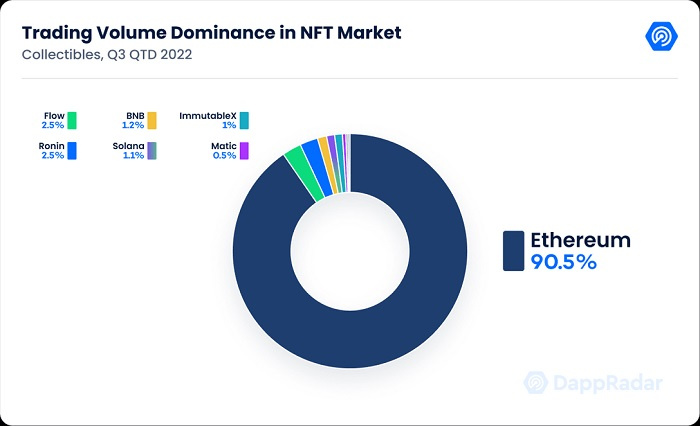 Looking at the number of on-chain sales in Q3 2022, things are different, with Ethereum still the dominant chain, but with only 26.22% of total sales. As can be seen from the obvious difference between transaction volume and transaction volume, Ethereum may have attracted more “high-end whale-level buyers”, while other blockchains are favored by small and medium traders. Among the top 11 NFT projects (shown below), Yuga Labs has four projects: CryptoPunks, Bored Ape Yacht Club (BAYC), Otherdeeds for Otherside and Mutant Ape Yacht Club (MAYC), which traded in Q2 amounted to more than $237 million. But in the third quarter, the transaction value of the top 11 blue-chip NFT series fell by 88% to just over $334 million, which is not far behind the second quarter of 2021. In fact, if we break down to the month, we find that the blue-chip NFT transaction volume in June was $203 million, an 83% drop from the $1.2 billion in May. This situation is likely to be caused by the collapse of Terra and the liquidity crunch in the market. However, even with the decline in total transaction value, the floor price of the top 11 blue-chip NFT series did not drop significantly, and was roughly the same as the floor price before Terra crashed. 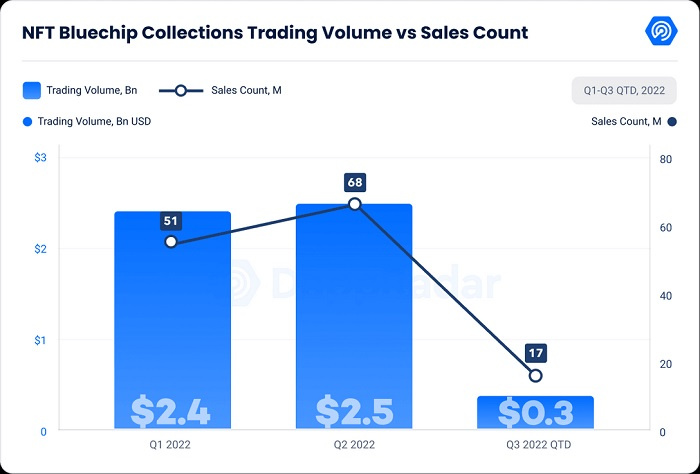 Since these NFTs not only represent digital collections, but also act as access passes to everyone’s identity, the “average days held” indicator is particularly important. In this regard, CryptoPunks ranks first with an “average holding days” of 239 days, followed by BAYC with 129.8 days, and MAYC and Otherdeed with roughly the same average holding days at 96.9 days. In addition, Azuki has the lowest number of “average days held” metric, suggesting that Azuki NFTs may be viewed more as investment vehicles rather than long-term holdings.

Since January 2021, more than 4.5 million digital art NFTs have been sold, with a total transaction value of over $3 billion. It is said that collectors have turned to the digital art market due to the difficulty of purchasing physical art during the epidemic, among which Beeple, Pak, Fewocious and several other artists are the main contributors to the market, and also promote NFTs to the mass market. 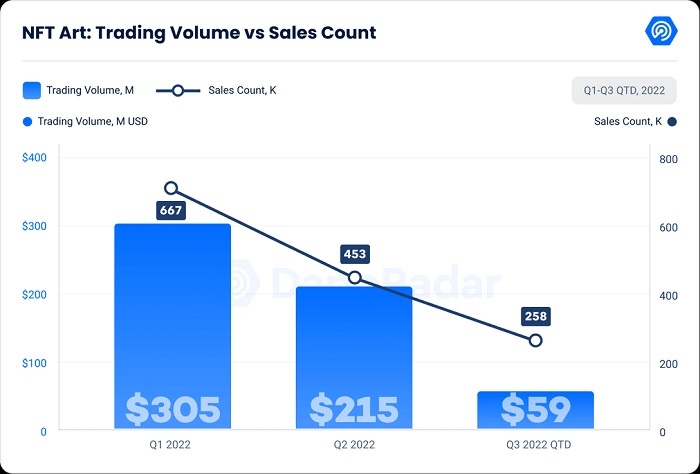 However, there were some bright spots in the digital art NFT field in the third quarter. For example, the Museum of Modern Art (MoMA) in New York has begun to consider spending $70 million to purchase NFT-related artworks.

GameFi is worth over $8.6 billion with 847,000 daily unique active wallets (UAWs) registered in August and is expected to grow exponentially over the next few years. Many popular blockchain games, such as Axie Infinity, Gods Unchained, and Aavegotchi, use NFTs to interact, and major game companies such as Ubisoft have also incorporated NFTs into game design. 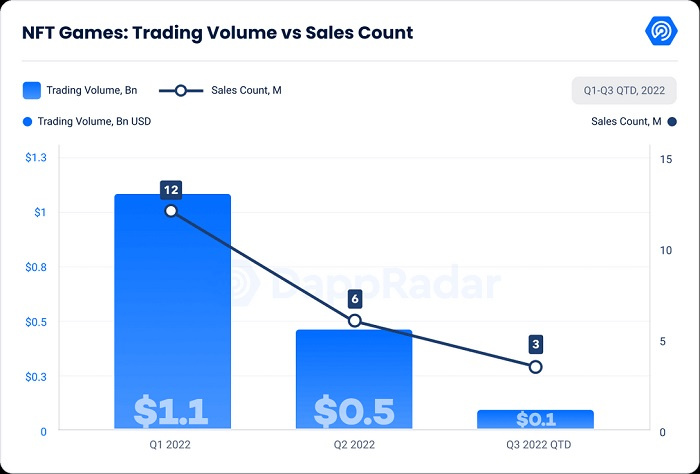 However, not all traditional gaming communities welcome NFTs. Three game companies, such as EA Games, Mojang Studios and Team, have announced that they will not use NFTs in their games.

In the first quarter of 2022, the total transaction value of game NFTs exceeded $1 billion, fell by 53% in the second quarter, and fell further to $71 million in the third quarter, a drop of as much as 84%. In terms of sales volume, the market trend is also not optimistic: in the first quarter of 2022, the sales volume of game NFTs was close to 12 million, and in the second quarter, it dropped to 6 million, a drop of 50%, and in the third quarter, it fell further, only 3.3 million transactions. 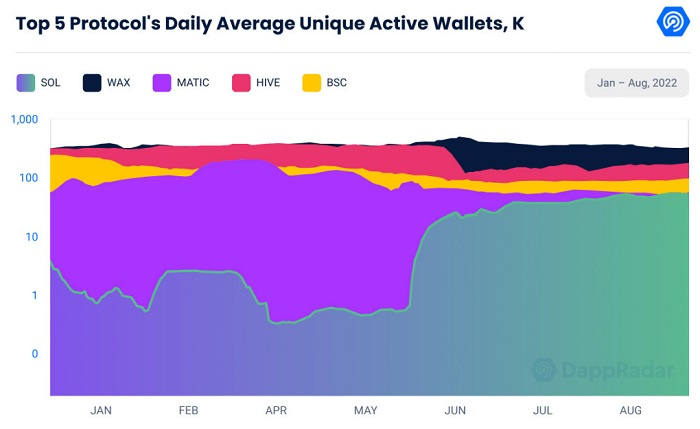 It should be noted that although the total transaction volume and sales of blockchain game NFTs have dropped significantly, they still attracted more than $4 billion in investment.

The fashion industry’s first NFT “trial” took place in the footwear market, when RTFKT Studios launched their own pair of branded virtual sneakers, and luxury giant Gucci released a virtual shoe called “Gucci Virtual 22” This trend has even been transferred to gaming platforms. For example, League of Legends has announced a partnership with Louis Vuitton, and British fashion giant Burberry has jointly released a wearable NFT with the Web3 gaming platform Blankos. 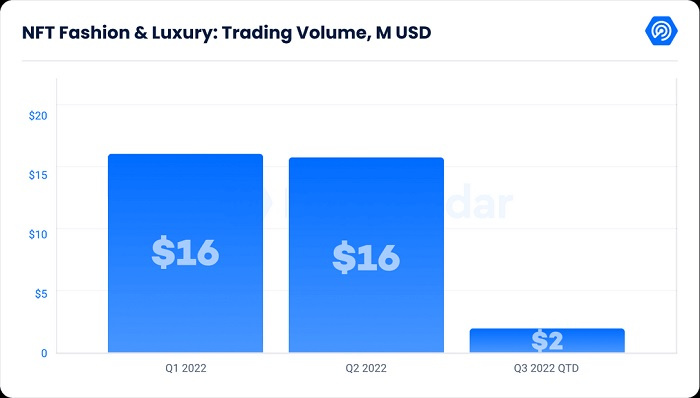 However, there were some bright spots in the fashion NFT market in the third quarter, such as the launch of 250 CryptoPunks-themed “NFTiff” collections by Tiffany & Co, which generated $12.5 million in revenue. Nonetheless, the sports world is still expected to become one of the most active NFT vertical markets, Sorare is expected to benefit from the popularity of the World Cup, and NFTs on the Flow chain are also showing signs of steady development due to the cooperation between the NBA and the NFL.

Although no one can accurately predict the future of the global cryptocurrency market, NFTs are attracting a wider range of market participants, and blockchains such as Solana, Flow, and Tezos are also driving NFTs to embrace emerging blockchain technologies in industries such as gaming and entertainment.

It is worth mentioning that many brands have begun to actively adopt NFT technology. Ticketmaster has just cooperated with Flow to integrate NFT in the ticket business; Starbucks also announced the launch of “Starbucks Odyssey”, which combines the Starbucks Rewards loyalty program with the NFT platform. By allowing its customers to earn and buy digital assets to unlock exclusive experiences and rewards like perks or free drinks, Odyssey is trying to use Odyssey to give loyal customers a wider range of rewards, while also building a more engaged community.

Frankly speaking, it is difficult for the NFT market in 2022 to once again create the brilliance of the $25 billion in sales in 2021, especially under the factors affecting the market such as the Fed’s interest rate hike and inflation uncertainty, both cryptocurrencies and traditional financial markets are experiencing. Violent fluctuations, but in contrast, the NFT market has not been affected as much as people think, and it has resisted the beating of the bear market, and the future can be expected.